This is a guest article from Jeremy Antley who is currently pursuing his doctoral research on Russian Old Believers that immigrated to Oregon in the 1960’s.  When not rummaging through the archives or taking care of his two dogs in Portland, Oregon, he also takes time to write about all things (digital) culture, (Russian) history and (board) games related on his blog Peasant Muse (peasantmuse.com).

Over the past year, in moments of (supposedly) spare time, I helped play-test a new board game by Labyrinth designer Volko Ruhnke titled Andean Abyss (http://www.gmtgames.com/p-337-andean-abyss.aspx).  I’ve been increasingly playing more and more board games, and when the opportunity came up to help with the development of a new title I jumped on board.  You may remember that Matthew Kirschenbaum wrote on Labyrinth almost a year ago, in a post titled “Playing the Present: Gaming Egypt with GMTs Labyrinth.” (http://www.playthepast.org/?p=700)  Perhaps inspired by the generally positive reception of Labyrinth, GMT Games announced in the opening months of 2011 that Andean Abyss would be the first title in the newly planned COIN (Counter-insurgency) Series focusing on historic internal war scenarios in which insurgency and the interaction of multiple sides played a major role.  Andean Abyss seeks to model the Colombian experience with insurgent and counter-insurgent operations, focusing specifically on the period just after the demise of the Medellin Cartel in the mid-90’s and up to the middle of the past decade.  Players can choose to be one of three available ‘factions’ (the long-standing and still active marxist guerrilla force known as the FARC, the right-wing paramilitary AUC and the drug producing Cartels) or the Colombian government itself.

Each side has different victory conditions that they achieve using different methods, a design feature that acknowledges the fundamentally asymmetric nature of COIN.  The Government must secure the cities and countryside, utilizing ‘sweeps’ and ‘assaults’ to find and then remove guerrilla presence while also training a balance of ‘police’ and ‘troop’ forces to secure, stabilize and improve (through ‘Civic Action’) the ‘support’ of a targeted region.  FARC looks to erode support and produce opposition through use of terror and kidnap operations that discredit and sap resources from the Government on top of building a counter-state infrastructure, represented by the number of FARC bases on the map.  AUC seeks to terminate the marxist forces through either ambush or assassination and wins only if they have more bases on the map than FARC.  Finally, the build-up of both resources and bases is the goal of the Cartels, whose ability to bribe other factions and cultivate drug-processing facilities quickly makes them a potent force.  Of course, it’s not enough to simply achieve victory- a faction must maintain their victory conditions until a ‘Propaganda’ event appears in the deck of cards that operates as both regulator of faction turn order and producer of game narrative events.  Verbal negotiation and coordination between players is encouraged, as often factions can become temporary allies if a common goal is in all parties interest.  What often emerges is a ‘castle in the sand’ situation, as players that take the lead must inevitably fend off attacks from all the others. 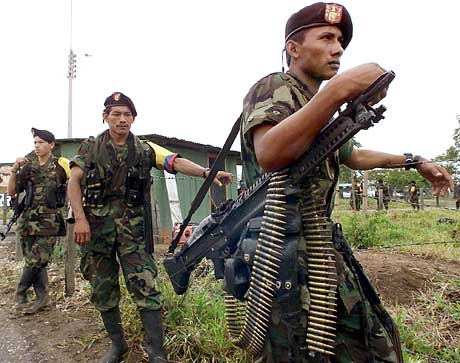 Andean Abyss thus presents, over the course of a 3-4 hour session, an unfolding narrative of Colombia’s insurgent struggle modeled on that nation’s historical development of COIN strategy.  Yet beyond attention to historical narrative, there is a larger question to be asked of any attempt to model COIN; is the model presented a valid interpretation depicting the complex interplay of forces involved?  Brian Train, known for his extensive treatment of irregular conflicts in game designs, summed up the issue on the ‘I’ve Been Diced’ podcast (http://ivebeendiced.blogspot.com/2011/07/ive-been-diced-episode-20-brian-train.html) recorded 17 July 2011:

“And I will freely admit that validation is a real problem with these games, to a much greater degree than, for example, a tactical naval game where you are mostly concerned with ballistics and numbers.  In an irregular, guerrilla warfare situation, whose to say how many free clinics or land distribution schemes add up to a +1 die roll modifier on a mission?  Or how many pyramids of skulls do you have to build before the enemy will be relied on to give up?  And what does giving up even mean in that context?  How many troops do you have to deploy in an area before they can reliably prevent the passage of guerrillas through it?  Now these are valid questions, but I can only say that there is no precise answer.”

What Train reveals in his comments is two-fold.  Not only are irregular conflicts, a large field in which COIN is but one category, inherently difficult to model but the model’s validation largely relies upon how the designer frames the conflict and abstracts its range of effects.  In the Consimworld Forum (http://talk.consimworld.com/WebX?14@755.n664cibN75U.4@.1dd517eb/0) for Andean Abyss, Ruhnke stated that the game will come with “extensive design notes explaining the rationale behind the game” in addition to a “sourced historical background on each of the 72 events” represented in the game deck.  Validation, in part, for Andean Abyss will come from the expertise in sources Ruhnke used in creating his model.  Later on in the same forum post Ruhnke states, “the historical notes in the Playbook are extensive…for anyone interested in how the game seeks to represent insurgency in general or the Colombian conflict in particular, there will be plenty to chew on.”  This same statement could easily be applied to the Army Counterinsurgency Field Manual (http://www.fas.org/irp/doddir/army/fm3-24.pdf) (FM 3-24) released to the public in 2006.  Something that I didn’t know, but Brian Train alerted me to in the ‘I’ve Been Diced’ podcast mentioned above, was that the 2006 Counterinsurgency manual was the first to contain an annotated bibliography and suggested reading list in the back for readers to consult.  Once again, validation is sought from the expertise of the past. 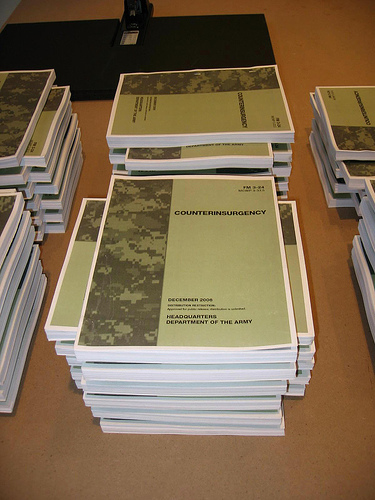 However, if we accept perspectives of the past viewed in the present as a partial source of validation, then we must also accept that our perspective of the past will eventually change and facilitate a new set of ‘expertise’ and ‘experiences’ from which to draw upon in creating updated sources of validation.  Against this backdrop of constant re-evaluation and shifting perspective, board games become anchors in time regarding the analysis and understanding of the topics they explore.  I mention this obvious point only because it has some very interesting implications for how we should understand, analyze and potentially use board games that model COIN specifically, and other conflicts generally.

I turn to Brian Train’s podcasted thoughts again, as he succinctly makes the point I wish to explore:

“…the value of designing and playing these (irregular conflict) games, I think, is getting the players to think about what could be going on and how it works out in the framework of the game.  In short, it’s often the discussion of the parameters and the mechanisms of the game that can be the most valuable part.  Incidentally this is part of the reason I haven’t made the leap to digital games… I find that a manual game is much easier for players to tweak themselves if they want to substitute their own assumptions in one of my games.  You can rewrite a paragraph and that will have the same effect when you’re playing a game face to face with someone as it would, you know, rewriting 500 lines of code in a computer game.”

There is a flexibility in board games that digital games have yet, and may never, be able to equal.  Anyone with the ability to read, write and make assumptions can alter the parameters and mechanisms of a game, or create a new one entirely, and play them through to see the results.  A board game in its original design might act as an anchor in time, but its open nature and flexibility mean that all aspects of the anchor can be inspected for use in modification, or for creating new anchors all together. 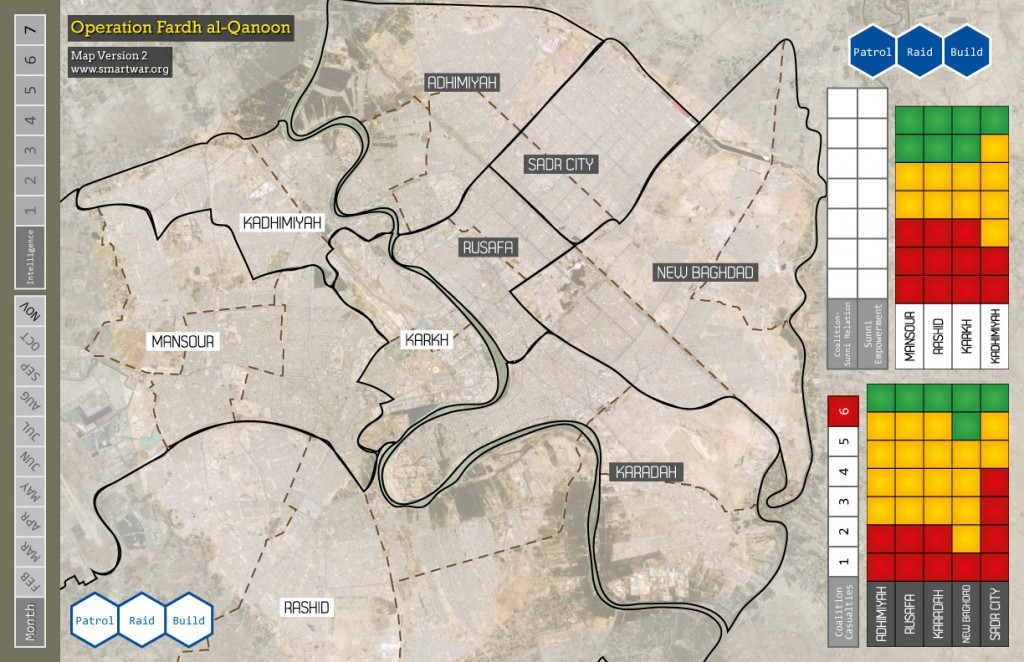 Take the case of King’s College student, Robert Hossal, who is documenting on his ‘Smart War Blog’ (http://www.smartwar.org/) about a project for his Conflict Simulation course taught by Philip Sabin.  Choosing to model ‘Operation Fardh al-Qanoon‘ (http://en.wikipedia.org/wiki/Operation_Imposing_Law) (a.k.a. the Baghdad Security Plan), Hossal selected the first real test of General Petraeus’ re-visioning of how COIN operations should be carried out in a period that is widely known as the beginning of ‘The Surge’.  Immediately questions of validation became apparent.  “The problem with getting the simulation results to match up with reality is creating the baseline for results in the first place,” wrote Hossal (http://www.smartwar.org/2011/12/the-elements-of-an-operation-fardh-al-qanoon-simulation/), who later described how he intends to measure the impact of the two sides- Coalition and Anti-Coalition forces- in gameplay terms.  Coalition forces will be tasked with promoting stability through reduction in violence, all the while trying to minimize both civilian and troop casualties when carrying out the delicate mix of offensive and security building operations.  Anti-Coalition forces, which include Sunni/Shi’ite insurgents and al-Qaeda operators, can win through either ensuring that Baghdad remains in the throes of chaos when the game ends or inflicting enough casualties so as to greatly surpass the historic levels encountered, making the operation a ‘political failure’.  Hossal is still in the planning/design phases, but hopes to release his draft rules and counters used in the game soon.

All of this leads me back to my original question asked of Andean Abyss, a question that could equally be applied to Hossal’s ‘Operation Fardh al-Qanoon‘.  Is the model presented a valid interpretation depicting the complex interplay of forces involved?  While I mentioned earlier that validation can be partially achieved through source evaluation, Train’s comment on ‘discussion of the parameters and the mechanisms’ being the most valuable part of playing and designing irregular conflict games, I believe, forms the greater part of validating a potential COIN model.  Because, really, board games through their abstraction cannot hope to ‘simulate’ a conflict, but they can spur debate and interpretation of how a conflict is modeled through the space afforded by their abstraction.  Even better, these abstractions are not kept hidden from the player in ‘black boxes’ like those encountered in many digital games.  This means that games like Andean Abyss and ‘Operation Fardh al-Qanoon‘ provide excellent pedagogical tools to be used when examining how insurgency is conceived and represented- the real benefit, the true source of validation, comes not from playing and winning the game but rather from playing and discussing what the game attempted to accomplish and whether or not it succeeded in doing so.