In a previous post I asked if the game Colonization was offensive enough. That post explored my own experience playing the game as a way to think through what the game means and what it says. As a result of that post, Rebecca Mir, an M.A. candidate at Bard Graduate Center, worked up a rather extensive paper exploring some of those issues in further depth. In preparation for a book chapter on the game that Rebecca and I are working on we thought we would take the opportunity to blog through and invite a broader discussion of some of the ideas that we hope to engage with in that chapter. This will likely be the first in a series of posts which we co-write. In this post we explore what happens when you make Native peoples playable in the game.

Making Indigenous Playable Characters: Setting bPlayable to 1
When you play Colonization you do not have the option of playing as indigenous peoples of the Americas. You’re meant to be the European colonizer; you go over and start colonizing. With that said, it turns out that it is actually relatively easy to change that. Even after a slight modification to make them playable, however, the Natives aren’t really playable in the same sense as the Europeans.

As Androrc the Orc explains on Civ Fanatics:

It is very easy to make natives playable (you just have to change the “bPlayable” field in CIV4CivilizationInfos.xml to 1), but the gameplay is uninteresting… almost no buildings, little options for play, etc… That having been said, things could be done to improve them, perhaps to the point of making playing them be interesting, but a way for them to sell their goods, among other issues, would have to be thought out.

The image of Tenochtitlan comes from Robert Surcouf who quite eloquently captures the sentiment of the situation in his comment, “There is not much in Tenochtilan, but it belongs … to me. To us at least, the absence, the ghost town in the Native city speaks explicitly to the limitations placed on native peoples in the game. To make Natives playable in a way equal to that of the European powers in the game, we need to more deeply explore what rules Colonization has used to define what Native peoples can and cannot do.

if (isNative()){return false;}:Removing People-ness through exceptions
if (isNative()) appears in CvPlayer.cpp, one of the core game’s files, 23 times.   Edit See the comments below. The struck through sentences are, in fact, exactly backward. Disregarding those sentences, the idea behind them remains, isNative is how the game assigns new properties or removes characteristics from the Natives. I’m not going to cut up and rewrite the whole post now but I wanted to make sure this was corrected for any new readers before getting too far into the post. I also struck out the ! in the first sentence. isNative appears 23 times in the file seven of those times as part of !isNative End Edit

Throughout this CvPlayer file there are a range of statements that provide peoples in the game with particular abilities (determined elsewhere in the games code). What is interesting about this particular way of setting up and building Colonization is that Native are largely explicitly created by the negation of rules that grant particular characteristics to the colonial powers. From the perspective of the games source code there are normal peoples (colonial powers) who come with a range of abilities and characteristics and then a set of exceptions that strip many of those abilities away from peoples who are flagged as “isNative”.  Here are a few examples of how you can override these issues. 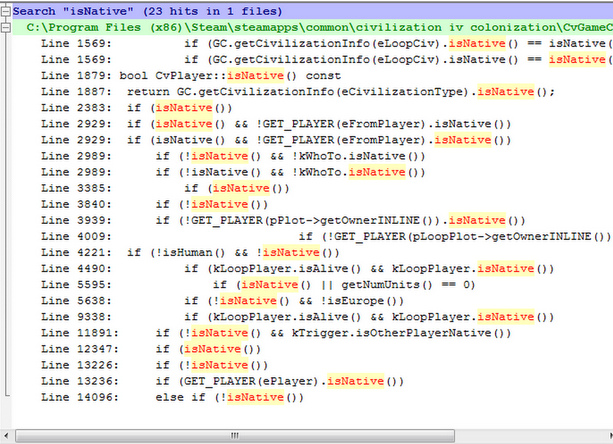 Natives were created by consciously turning off individual characteristics of standard peoples in Civilization IV. That is to say, Native peoples are not a different kind of entity in the game; they are quite literally another kind of people. We’re not really sure what exactly to make of this, but here are a few preliminary thoughts.

The game resists making natives playable, but it exposes its logic in the process
We can read the model of the game from our experience but we can also open up the files and start looking at exactly how the game’s model works, and explore exactly how those rules are enacted. This is just a first peak under the hood; we would by no means suggest that we fully grasp how things work here. With that said, when we open things up and poke around we can quickly save changes, like turning bPlayable to 1, and start up the game to see the results of those changes in the game world. The Natives are only one digit away from being playable, and if we make that change, we can go back into the live game and see what happens when they become playable. This kind of code tweaking has a corollary in the idea of deforming texts to better grasp and appreciate their meaning. In modding and editing the source of the game, in deforming its source code, we come to learn more about how the game models the world. While it is easy to make a switch, and turn bPlayable to 1, the game resists our ability to make Natives playable in the robust sense. In the process of tinkering with the code, the limitations placed on Natives are exposed. To this extent, we think it is clear that poking into the code helps us develop a much richer understanding of exactly what differences exist in the experience of playing the game.

What should we make of the fact that much of what defines Native peoples in Colonization is enacted through the negation of abilities granted to the colonial powers in the game? There is no way around it; at the level of the scripts the game systematically and explicitly removes things like civic development from Native civilizations. We can actually see the sections of the code that strip away particular features of what it means to be a robust people in the game. In this sense we could say that we can see the colonialism of the game represented in the colonialism of the code. With that said, it is clear that this is a relatively efficient way to write code for the game’s peoples. The Natives are not the result of special creation. In effect, the scripts speak them into existence at the level of code as a defunct, stripped, and inhibited version of their oppressors. To what extent do we think it matters exactly how the rules of colonialism are enacted in the scripts? Until the guidance from some discussions in the Civ Modder community prompted us to look under the “hood” of the game we did not know exactly how things like peoples were modeled in the game. We could argue that this is simply an efficient way to enact the experience of the game, one that is largely borrowed from the earlier Colonization games, and one that is actually fundamentally different in the Spain and Inca expansion pack for Civilization V.

What can we say about games that invite us to change them?
Elsewhere Trevor has suggested that the modifiable nature of games like these prompt a challenge for exactly what we can say about them. How exactly does one comment on a text that comes with instructions for how you could go about rewriting it? In this case, as we step in to modifying the game it becomes clear that despite our best wishes to modify Colonization to play as a Native American culture, the intentions behind the model of society in the code itself resists our actions. Sure you can make the Natives playable, but once you do, you are faced with a range of rules that make that play problematic. If we dig further and over-write those rules we discover that the game sort cannot be won unless we can trade goods with a king in Europe. In any event, we think we can say that the models in the game’s code, while rewritable, inevitably carry with them some extensive inertia. It would take a substantial amount of  work to overcome the inertia set in motion by the way that the game’s designers modeled the world. This inertia, powered by rules for winning the game and the exceptions placed on Natives in the code, resists our desire for a revisionist experience of Colonization in which Natives are robust playable people. Attempting to mod the game only further communicates the authorial intentions and implications that result from its design.