The premise behind Colonization has been controversial since the game’s inception. For those who are unfamiliar with it, Colonization puts players in the shoes of a European power and sets them loose to colonize the Americas. Originally released in 1994 an updated version of the game was released in 2008. Many people could relate to Variety blogger Chris Morris’ reaction when he apparently “literally exclaimed holy sh*t” at the offensiveness of the idea. As Morris put it, “A game about colonization that’s entirely about controlling the settlers can either force the player to do horrific things or let him avoid doing it and whitewash some of the worst events of human history. Either option is offensive.” Among the most problematic elements of the game’s structure is the fact that native peoples and Europeans are not even algorithmically the same kind of people. Native peoples are unable to establish new cities, they simply wait for Europeans to take advantage of them in trade or obliterate and loot their civilizations. Consider that a great game strategy is to send missionaries to native villages and then attack those villages. The native converts abandon their villages and flock to work in your cities as you continue to pillage their former communities. The mechanics of the game suggest and reward this behavior. 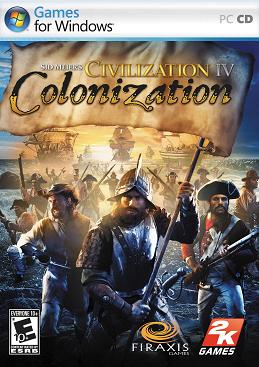 In short, at the codebase, Colonization is racist and offensive. But wouldn’t, and shouldn’t, any game about that period in the Americas be racist and offensive, if it were even remotely faithful to that time period? And what lines have we drawn in accepting the fact that video games allow you to play more abstracted bad guys such as gangsters, murders, and thieves.  Is a historically accurate “bad guy,” a state sanctioned one, any different? If we are to play historical games, how many options would be available if we were to cut out the disturbing parts of history? Building a game around a way of seeing the world, around a particular ideology, can be engaging as well as troubling.  Colonization is problematic, but the mechanics of the game offer players the opportunity to think about the games model of the history of conquest and exploitation.

Playing as the colonizer

You can see from the box art that the game situates the player in a triumphal role. With that said, I would hazard to guess that very few of the games players would identify themselves as fans of the historical idea of colonization. Instead, the game provides a place to explore, to play at war. While this is the appeal of the game to a new player, I would suggest that the experience of playing the game, of coming to understand the algorithms and mechanics of the game as a player, does not glorify colonization but actually undermines that glorification. The game does not make one feel good about the colonizers.

Feeling guilt as the colonizer

I bought a copy of the original version of Colonization when I was in the sixth grade.. I had spent the previous year or two exhaustively playing the original version of Civilization and the prospect of a similar but different game was exciting. As with Civilization, I played the game repeatedly, first learning the basic rules and then trying out a range of different play styles. For details on the rules and system I would suggest the walkthrough, Winning at Colonization or Economic Warfare for Fun and Profit. At first I played as the French and the Dutch. The French get bonuses to interactions with native peoples and the Dutch get bonuses to trade. In both cases, I would try to rewrite history and coexist with native peoples. After exploring this side of the game, I eventually played a bit more as the Spanish, who get bonuses to the gold they loot from destroying native cities. Exploring that part of the game was engaging, but it always brought with it feelings of a kind of guilt. Exploring the possibilities provided by the game was always engaging, but particularly in these cases I would not call it fun.

Films that explore the world from disturbing points of view are in some ways less controversial than games that do the same, think American Psycho or I Shot Andy Warhol . The interactivity and agency that players experience in games make playing from disturbing points something that many people are still uncomfortable with (c.f. State of California, or reactions to Super Columbine Massacre). But player agency in games provides the ability to provoke feelings of guilt for their in game actions. The power of this guilt suggests a potential for games that portray disturbing points of view as potent vehicles for exploring the past. In my own experiences with Colonization, experimenting with scenarios in the game, thinking through how it represented the mechanics and ideology of this period in history helped me to develop more nuanced models of that history.

Experiencing the Banality of Evil through an allegory of control

I recently bought the new version of Colonization and was struck by another part of the game:  It quickly became boring. As you ramp up your colonizing, the game is primarily about the logistics of gathering raw resources, turning them into commodities and selling finished goods back in Europe. Managing a networking of ships to transport those materials and commodities becomes the central activity of the game. As you become mired in the banality of logistical shuffling, you are struck with the ennui of the bureaucratic evil at the core of the game. The cover of the game shows men (and only men) of action, but your “glorious” conquest is rewarded by endless project management and accounting: a sort of spreadsheet of cultural domination. The city screen, one of the games primary interfaces, demonstrates the core role of these commodities. At the bottom you see a list of your various resources. The view of your city shows what raw materials your settlers are cultivating, and how those resources are being refined. 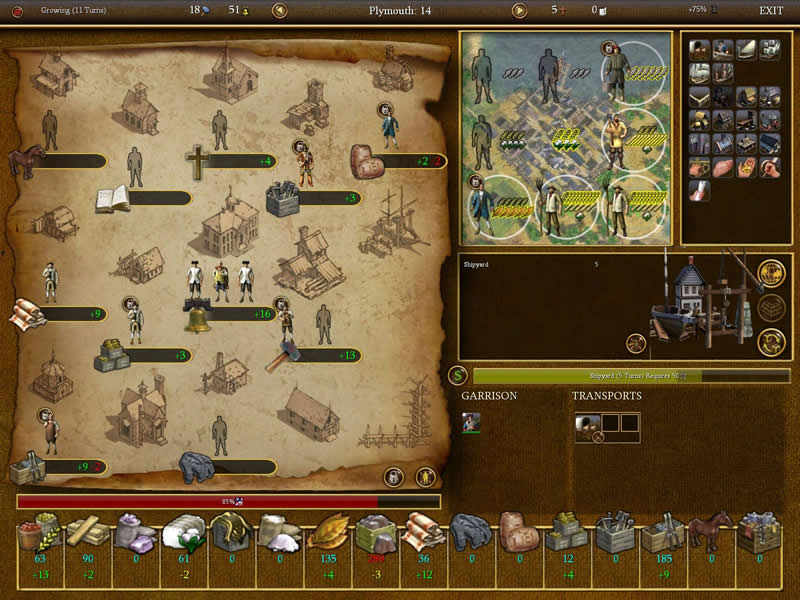 The way a simulation can put you in control of a set of competing values in its algorithms is something particularly novel. As Alexander Galloway suggests these kinds of games are always an “ideological interpretation of history” or the “transcoding of history into specific mathematical models” (102-103). What I find particularly interesting in this case is that the games models are similar to the actual way that states “see”. Like states, these kinds of games make people and landscapes into resources and commodities. Galloway’s Allegories of Control (pdf) are similar to what anthropologist and political scientist James C. Scott discusses in his book Seeing Like a State. Through a series of examples of failures in governance, Scott explores the way governments make nature, cities, and people legible through categorical and numerical simplification. Games like Colonization in effect let you see the world in the kind of ways a state sees the world. This is a particularly powerful lens for understanding the past.

Colonization’s failing is that it is not offensive enough

Ultimately, my problem with Colonization is that it is not offensive enough. In particular, there is one glaring omission. There is no slave trade in Colonization. In this capacity, it does significantly whitewash history. If a game is to enable us to see the world as a European colonial power, particularly one focused on commodities, it needs to incorporate triangular trade. Can you imagine how powerful this would be? If the game forced players to make decisions about trade routes in Africa?  If it forced them think about the results of the commodification of people but still presented information about those who died in transit and died from disease and starvation in colonies? I understand why the game does not incorporate this history. In it’s current form it invites significant criticism for it’s portrayal of conquest of indigenous people, adding slavery would make the game far more offensive. Further, there is a cultural norm about misrepresenting or ignoring the history of slavery in mass media (c.f. The Patriot). Curiously, the much less historically specific Civilization games have long incorporated slavery.  Not including slavery in Colonization is in some ways much more offensive.  If someone wants to play a game where they replay the colonization of the Americas shouldn’t they have to think about the history of slavery as well?

Colonization remains a popular game. When Chris Morris’ blogged his concerns he received 280 comments, largely in defense of the game. His reactions to the themes in those comments give you a sense of their tenor. His post was subsequently covered on Kotaku and The Escapist. The game offers substantial promise. I have suggested that while the cover glorifies colonization, the experience of the game undermines that glorification. The game ultimately lets players experience a range of emotions as the explore the possibilities which are provided by the algorithms of the game. However, does side-stepping the history of slavery whitewash the game?  I am not begrudging the developers here. I think the reason slavery is not a part of this game has a lot to do with self-censoring, and I can only imagine the kind of bad press they would have received if they did include slavery. So, if we are really going to get serious about historical games do we need more sophisticated views on what kinds of identities and roles games let players take on? More directly, do you think Colonization is offensive? Or do you agree with me that it isn’t offensive enough?

2010-11-23
Previous Post: A note on the word “practomime”
Next Post: The Unexamined Game is Not Worth Playing…