This post picks up where my last one left off, and does the heavy oral formulaic lifting I mentioned before. If we take the phrase “Playing the Past” as loosely as I think all of us here would like, playing the past is exactly what the homeric bards were doing, and the rules of that play were the system of oral poetic formulas of which I discuss an interesting wrinkle here. On the other hand, you’re almost certainly reading this post because you like the things we call “games,” so it behooves me to say (as usual) that the rules of a traditional oral epic system seem to me highly analogous to what we call the rules or the mechanics especially of narrative videogames. For the sake of brevity there’s not much overt videogame content in this post, but I promise that I’m setting you up to see Mass Effect 3 in an entirely new light, when it finally comes out.

When we last left Achilles, he was sitting in his tent refusing to fight, because Agamemnon took his prize (who happens, distressingly to modern sensibilities, to be a girl) away. Meanwhile, Achaean warriors have been dying in large numbers. That’s the situation when Book 9 of the Iliad starts.

In Book 9 as we have it, bad old Agamemnon sends to the tent of Achilles three ambassadors: Ajax (strongest of the Achaeans), Odysseus (smartest of the Achaeans), and Phoenix (old friend of Achilles). When they get to Achilles’ tent, each of those ambassadors gives a speech about why Achilles should accept Agamemnon’s offer of restitution and come back to the fighting. It makes sense, and it builds to a very nice crescendo in the speech of Phoenix, after which, from an ethical point of view, the audience is in a lot of suspense about what Achilles should do, despite being in no suspense at all over what he will do.

But there’s this one facet of the episode (which, just to remind you of what I said a few weeks ago, probably would have made a perfect tale to sing in an evening’s epic entertainment 2800 years ago) that doesn’t really make much sense at all: there are these famous dual forms, which seem, in Iliad 9, to refer to two ambassadors rather than the three we actually have.

What the heck is a dual form? Well, some languages have a special ability that English has almost entirely lost, to talk about two, and only two, things at a time. (English does have a vestige of it in our usage of “both,” which can refer only to two things at a time.) The dual is mostly useful for talking about eyes and hands and such, but occasionally it gets a workout in other circumstances, and Book 9 is one of those. Several times, despite our having three ambassadors, the version of Book 9 that we have, in the original Greek at least, speaks, for example, of how “the ambassadors both went along the shore.” 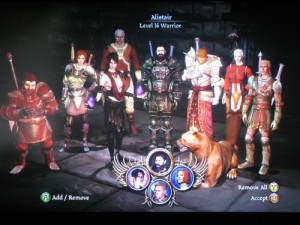 Those forms suggest very strongly that going so far as to add an ambassador and his speech was within the scope of possible improvisatory change by the bards of the Iliad, which makes me, at least, instantly think of the party selection screens one sees in BioWare RPG’s. To spell out what seems very likely to have happened these thousands of years ago: one bard came up with a story about how Agamemnon sent Ajax and Phoenix, and used the dual number, because he was singing a tale about two ambassadors. Then, another bard, having heard the story as sung by the first bard, or perhaps having been a student of the first bard, decided to sing a different version of the same story. Whether as a tribute to the first bard, or because certain phrases had become basically unchangeable, or perhaps simply because it was allowable and didn’t matter very much, or even because there was reason to mark out Odysseus’ inclusion as anomalous, this second bard retained the dual forms despite his innovation of the third ambassador, Odysseus.

(The reasons for thinking that Odysseus is the addition rather than Phoenix or Ajax are complicated and not immediately relevant to the point of this post; scholars differ, as they say, and as one of those scholars I’m persuaded that the antagonism between Odysseus and Achilles, along with Odysseus speaking out of turn, militate in favor of the position I’m here adopting. I’d be happy to discuss this issue in the comments, and I’m planning to get deeper into the relationship between Iliad and Odyssey and what it has to do with games in a future post.)

If you’ve played a narrative videogame, you’ll know exactly what I’m talking about. If you’re not a gamer, though, it’s not easy to make clear precisely what I mean on the page, because I’m talking about something books, and movies, just don’t do, but in my next post I’ll give it my best shot, in the context of Halo, Mario Bros., and Mass Effect.

2011-03-31
Previous Post: Tecumseh’s Curse (Chapter 1)
Next Post: Symposium: “Roots of Humanistic Game Criticism,” in The Lord of the Rings Online