Play as Hermeneutic: A Forgery Game for History Students

At last year’s THATcamp at the Center for History and New Media I helped facilitate  a mini-game jam. In an hour the 20 or so people that participated came up with 4-5 kinda cool ideas for humanities games. Each of the groups promised to post something about their game concept. As the session leader (read:me) failed to post I have no one to blame but myself.

With that said, I’ve been thinking about the game concept my group developed and I thought I would share it. If I remember right Bethany Nowviskie and Doug Knox were in my group, anyone else who was involved feel free to pipe up in the comments and I can add your name here. Further, if I am getting any of this wrong I would encourage anyone who was there to correct me.

Each of the game jam groups took very different approaches to games. We were particularly interested in the idea of  using games as hermeneutic tactics to interpret texts, objects and evidence. The idea behind this came from Ivanhoe, a game which Bethany had been involved in creating.

The central idea behind Ivanhoe is that students take turns making “interpretive moves.” Now, as we are frequently talking about games as video games on this blog, it is worth noting that this game, and the game we developed is really more like a parlor game, or something like pictionary. Just as you can learn a lot about a person from how they play those kinds of parlor games you can learn a lot about a text by creating a game as a tactic to further your understanding of it.

Ivanhoe, was developed at UVA by Johanna Drucker, Jerome McGann, Bethany Nowviskie and others. I will quote at length from Jason Jones description of how he uses Ivanhoe to teach.  If you are already familiar with the game just skip ahead.

Students, working in groups of 3-5 (obviously no magic about those numbers), choose a text, and then take turns making a series of interpretative moves.  To make those moves, the students must take on a different identity, and the range of identities is quite large.  Maybe it’s a character in the text.  Maybe it’s an unseen editor, rewriting the text.  Maybe it’s a figure from real life.  (For example, if Hard Times were your text, maybe one person would be a factory owner, another a Chartist, etc.)  Maybe  you play the role of an actual critic who has published on this topic.  (“Hi, I’m Richard Altick, and I think . . . .”)

Once students have chosen their roles, the only constraint is that it needs to be clear that moves respond in some way to earlier moves–that is, one’s understanding of the text in question should evolve over the course of the game.

The way students set up the game is that they sign up for a free blog somewhere, and set up the permissions such that all members of the group can edit it.  (I usually ask to be set up as an editor, too.)  Students can make the blog readable only by themselves, by classmates, or by everyone.  Normally if they use a critic or other still living person, I ask them to make the blog private, to prevent self-googling issues.

Students make a pre-determined number of moves–say 4–over the course of a week, and then they collaboratively write a one-page paper about what they learned about the text from playing the game.  I also usually designate someone to serve as the coordinator, and encourage that person to keep track of how smoothly the process worked.  Finally, they usually make a brief presentation of their game to the rest of the class.

Ivanhoe is a kind of role playing game thats’ intent is both to act as a teaching tool, to prompt students to think about texts differently, but also as a hermeneutic tactic which can provide new insight and ways of understanding a text.

Taking Ivanhoe as a model we wanted to translate some of the ideas behind the game into the context of history. 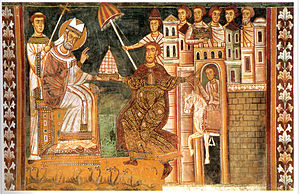 Our group decided to focus our game on helping players understand the nature of historical  evidence, and deal with loss and the limits of history.  The audience for this game is upper level undergraduate students or grad students in a history research methods course.

The goal is twofold.  First, to get students to grapple with the nature of historical interpretation.  Second, to prompt them to think about developing research questions that are  possible to answer.

Alternate Rule:
4.a One could also do this as something akin to Eat Poop U Cat, where people continue to translate the translation of the document’s historical question back into a document and back from document to question. I am not sure this would serve any particularly useful goal, but I would imagine that the game of telephone in here would be a good time.

Where does this get us?

Our group left the conversation about this quite excited. I am sure there are all kinds of folks who would be quick to say “That’s not a game.” There is a ton of excitement about games, and that generally means video games, but I think the broader idea of play, of parlour games, of barley games is actually a rich way for us to think about creating things like this that help us to hone our thinking.