In preparation for a book chapter on Colonization  we thought we would take the opportunity to blog through and invite a broader discussion of some of the ideas that we hope to engage with in that chapter. This is the second in a series of post which we will co-write. In the first post we explored what happens when you make Native peoples playable in the game. In this post we explore how cultural influence and exchange is (and isn’t) represented in the game.

Cultural exchange plays a major role in understanding the history of interactions between the ingenious peoples of the Americas and Europe. In works like Richard White’s notion of the middle ground or Karen Kupperman’s work in Indians and English, historians have developed rich discussions of what interactions between Native peoples and Colonial powers looked like. The functional and visual modes through which Sid Meier’s Colonization models exchange and interaction between cultures offer an interesting place to further interpret the game.

In order to win a game of Colonization, you must successfully manage relationships with other colonial powers and Natives. Most player strategies and game reviews suggest keeping amicable relations with as many Native cultures as possible because raising a rebel army is difficult enough without waging wars with your neighbors. At first players may think managing peaceful economic relationships with Natives is easy; they are a good source of trade and always give gifts to the player upon first contact. Trading with Natives seems straightforward; until you realize that most of their settlements consistently request guns and horses, and that once you trade these items with Native settlements, they will be used to upgrade military units. Below, the Arawak settlement Boriken requests horses while the Sioux settlement Isanti requests guns, as depicted by the respective icons next to each settlement’s name. 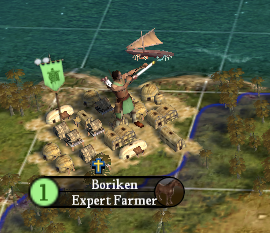 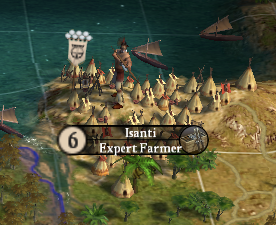 Of course you can use this to your advantage by selling guns and horses to Natives with whom you are allied, or more deviously, to Natives at war with other colonial powers. Once you (or another colonial power) start trading these items with Natives, it is clear that their cultures have been directly influenced by these new technologies.

This isn’t historically off-base; the horse made its way back to its continent of origin and into Native cultures thanks to the Pueblo Revolt of 1680, which forced Spaniards to leave hundreds of horses in the Southwest as they fled the area. Horses were subsequently moved through a series of Native trade routes and undeniably shaped Native cultures, most famously the semi-nomadic tribes of the Great Plains. Guns, along with many other material goods, similarly traveled between and within Euro-American and Native American groups. We find it refreshing to see an example of direct cultural influence in a core (but subtle) mechanic of a Sid Meier game. The Civilization games have previously been critiqued because trading supplies and technologies with other cultures for centuries produces no messy hybridized identities or beliefs.

But absent from Colonization is the exchange of germs between Natives and colonials. Native Americans had no previous contact with, and therefore no immunological defenses against, European diseases. And while disease isn’t an artifact that can be traded, or a set of beliefs that can be learned, it was transmitted between and had a huge impact on the people living on the “frontier.” The smallpox, measles, chickenpox, influenza, typhus, typhoid, cholera, bubonic plague, scarlet fever, and malaria were all unstoppable post-contact. Could you imagine playing a game of Colonization where over the course of a few turns, 80-90% of the Native American units were wiped out? Where entire villages you meant to trade with simply no longer existed? Or a game in which your units started to die from contracting syphilis from cavorting with Natives? The inclusion of disease in Colonization would certainly be more “accurate” historically speaking, but if having a range of choices to explore makes Sid Meier games fun, then such a mechanic would very likely worsen player experience. We also understand that coding for the exchange of diseases might unnecessarily complicate an already complex game and that it would be a natural decision on the part of designers to avoid another controversial issue in a game about Colonization.

Cultural cross-dressing, education, and assimilation on the frontier

Another benefit in maintaining good relationships with Natives in Colonization is the ability to establish missions and generate “Converted Native” units, pictured here in the game’s Civilopedia. He (and all Natives in the game, converted or not, are male) wears a waistcoat, breeches, stockings, and pilgrim buckle shoes, while the feather in his hair signifies his Indian-ness. Wearing certain clothing was, as Ann M. Little explains, “central to the discourse of status, power, and identity on the frontier.” As a cultural cross-dresser, the Converted Native represents the messy hybridization that the Sid Meier games typically avoid. However, there is no Euro-American equivalent to the Converted Native. While Free and Indentured Colonist units can be educated in Native settlements and learn master trades (e.g. farmer, tobacconist, cotton planter, etc.), they emerge from those settlements in colonial clothing, their cultural identity unaltered by their contact with Natives. The Converted Native, in contrast, will change into a Free Colonist unit if he graduates from a school within one of your settlements. Essentially, assimilation occurs through Western education, which removes all visual identifiers that this unit used to be Native (that is true for his skin color as much as his clothing). As far as the game is concerned, culture is transmitted in one direction, Natives can become European, but even via learning a trade from Native settlements a European does not take on any Native characteristics.

The fact that Converted Natives, through education, become white and lose any trace of their culture might seem to some simply a technical detail. However, this detail is particularly problematic in the context of the history of education of American Indians. One could argue that the game suggests complete assimilation and acculturation, as the Natives become indistinguishable from Europeans via education. However, in the context of American history the removal of any trace of Native-ness comes with troubling undercurrents. The process of cultural assimilation in the game is deeply resonant with Capt. Richard H. Pratt, founder and longtime superintendent of the Carlisle Indian Industrial School’s often mentioned sentiment that Indian education should “Kill the Indian, and Save the Man.” His attempts to systematically eradicate any traces of native culture in requiring individuals to stop using their Indian names, forbidding anyone from speaking of native languages, and explicitly forcing individuals to look more like whites by cutting off their long hair represent a similar model of cultural assimilation via education. This is not to suggest that the functionality of the game forwards this kind of argument, but simply to note that education functioning in this way fits troubling ideology.

There is no option for the player to keep Converted Natives from becoming European once they have graduated from school. If this makes you uncomfortable, then your only option is to keep the penalties (and rewards) inherent to the Converted Native and refuse to “educate” them. But they are easier to get than any other unit and since generating rebel sentiment, amassing an army, and selling manufactured goods is integral to winning the game, you may opt to assimilate as many as possible.

Do the Natives exist to be used as a means to an end?
In our last post in this series, we explored how the game’s code resists being rewritten in a way that makes the Natives a robustly playable people. In order to win you must revolt against your motherland and establish independence, something that Native cultures cannot do. The various traits that Native Americans posses were created in assuming that the player would only play as a colonial power. There is less variation in the Native cultures’ traits, and all of their traits intentionally benefit the player. For example, the various traits Native American leaders possess are: impressionable, indulgent, gracious, prosperous, and mentor. As a result of the fact that Native peoples are not meant to be played, they are described primarily not by internal characteristics but by characteristics by which a colonial power could use or manipulate them. Compare these traits and bonuses with those of the European leaders: libertarian, tolerant, disciplined, enterprising, militaristic, cooperative, charismatic, industrious, mercantile, determined, resourceful, and conquistador. The exception is that Natives can promote their mounted, melee, or gunpowder units to a specific status for “free.” 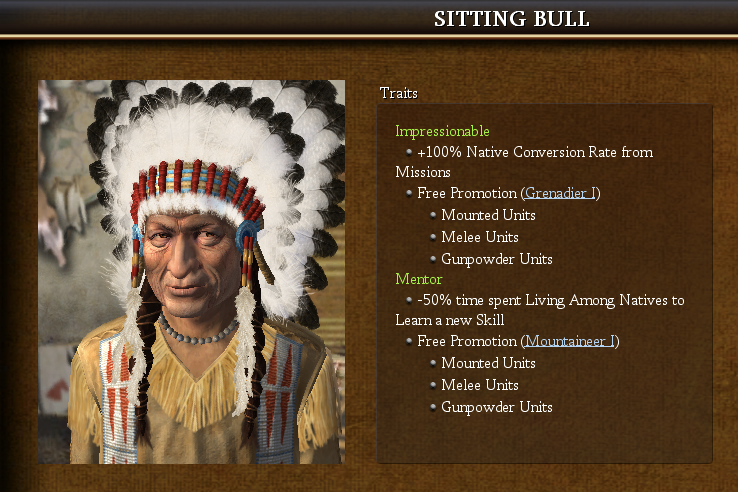 The Sioux, for example, have a free Grenadier I promotion for mounted, melee, and gunpowder units. This allows their mounted, melee, and gunpowder units to have an increased Settlement attack power of 20%. As previously mentioned, however, Natives must acquire guns and horses through trade with the player or other colonial powers. And depending on the player’s diplomatic relations with Natives, these militaristic bonuses could still be beneficial. If we were to play as the Sioux, we would quickly realize how little our cultural traits benefit us. Not only would we have to wait for Euro-Americans to trade guns and horses with us to make use of our one true bonus, we would also lose units to religious conversions more quickly than other Native cultures!

Is it possible to avoid playing an overly deterministic game in Colonization?
When considering how disease affected Native populations in combination with the advanced technology of the colonial powers, it might seem that European domination over Natives was a foregone conclusion. However, the great benefit in simulating history is the ability to explore alternate histories through a series of choices. But in order to win, players must be a colonial power and must revolt against their motherland. They will probably have to convert and subsequently educate natives in order to do so, all while benefiting from the Native cultural traits. So, all things considered, can we avoid the assumption that Americans had to revolt against their motherland, or that Natives had to be pushed west and onto reservations? If things like germs have been sterilized out of game play, why couldn’t there be more winning options available to the player than revolution? In forcing the player to relive the American colonial experience, Colonization systematically denies the player a series of interesting choices and opportunities to create a radically different past.

With this said, features like misrepresenting acculturation and assimilation and representing native peoples in terms of how they can be manipulated does make the game a better ideological model of the idea of Colonization. These features are actually in keeping with the idea that a game called Colonization should be offensive. When we take this perspective, removing players ability to dramatically change the past locks them in to the ideological model of the game. If we think about the purpose of Colonization as modeling a dark moment in history then the point in all of this discussion of exchange that becomes the most problematic is that the game doesn’t include the devastating role that disease played and completely avoids the slave trade.