For my birthday this past October, my girlfriend bought me a copy of Skyrim for XBox.  For those not familiar, Skyrim is the latest installment of the ‘Elder Scrolls’ series of open-world role playing games set in a Dungeons and Dragons-informed mythic backdrop.  It’s a standard RPG, where the player roams around an open and expansive landscape leveling up their various skills and slowly acquiring better gear (like enchanted weapons and armor) all while engaging in quests that either drive the main story-plot forward or add a bit of color to the already imaginative universe on display.  I love these types of games because they allow a kind of freedom of movement and exploration of the map that strict narrative driven games often lack.  Maybe I don’t want to slay the dragon right now.  Maybe I need to go help that homeless guy in town find his old battle helmet from a bygone war, or perhaps I want to go hunting for ingredients to make more healing potions.

But something began to occur to me as I was wandering across the vast mountain ranges scattered throughout Skyrim’s map looking for said potion ingredients.  (My character was an Orc who liked to brawl hand-to-hand combat style, thus necessitating the need for a well stocked healing potion supply)  The ‘high medieval’ background of the game contained a surprising amount of rationalistic and enlightenment based underpinnings that helped to support what I would call the ‘Medieval+’ background common to many similarly-themed RPG’s.  Everywhere the player goes there is evidence of a society deeply under the influence of ‘liberalistic’ ideals, be it through the plethora of books found all over Skyrim’s ludic universe (this despite the lack of *one* printing press) or, of particular focus for this post, the use of Alchemy as a pseudo-science to validate ‘folkloric’ herbal knowledge.

I want to use this post to explore what I mean by ‘Medieval+’ and especially look at how Skyrim treats the idea of knowledge reconfiguration and validation in the use of herbs to make more potent potions.  In doing so I will be referencing the work of scholar Kapil Raj, who studies how ‘modern’ knowledge is collected, transmitted, and reconfigured at the local level.  Rather than saying that modern designers have put their own biases and views into a supposedly ‘medieval’ game, I will argue that the systems and procedural rhetoric of Skyrim actually embodies a thoroughly ‘modern’ mindset that helps justify the positivistic setting and integration of the ludic universe into the player’s modern setting of play.

In his book, Relocating Modern Science: Circulation and the Construction of Knowledge in South Asia and Europe, 1650-1900, Kapil Raj argues that our contemporary concept of what defines the ‘modern’ is inherently tied to the Western European experience with enlightenment ideals and rationalistic inquiries.  However, if one extends their scope beyond that of knowledge making in Europe, there are several examples of how ‘modern’ knowledge is actually the product of local environments in distant locales far away from the European setting.  For example, medicinal knowledge may have been certified (through print and scientific acceptance via professional societies) in Europe, but if we trace where that knowledge originated then we are presented with a much bigger picture that must, by necessity, include fakirs, merchants and various other indigenous agents that European intermediaries utilized in gathering said medicinal knowledge- especially in locations like South Asia where such knowledge would be invaluable for the age of sail.

While Raj notes that more recent works studying the creation of knowledge focused on enclosed spaces like laboratories or museums, his ultimate conclusion is that we should study other spaces, outside of these enclosures, if we want to fully map how “localities constantly reinvent themselves through grounding (that is, appropriating and reconfiguring) objects, skills, ideas, and practices that circulate both within narrow regional or transcontinental- and indeed global- spaces.” (21) Knowing this, we can begin to analyze how Skyrim handles the creation and certification of knowledge through its use of the ‘Alchemy’ system, in addition to the other general qualities of the ludic universe that constitute the ‘Medieval+’ setting required for this knowledge transfer to feel appropriate to the player.  Given that Skyrim takes place in a fantastical setting, it is all the more curious that traces of the ‘modern’ can be found in these play-mechanics.

But what exactly do I mean by ‘Medieval+’?  I broached this topic, first, on Twitter, and the responses I received made for very intriguing debates/insights.  Here is the Sorify I created detailing this discussion:

Then, a week later, I once again discussed what ‘Medieval+’ means on Twitter and received a very astute response from the Culture Ramp account:

@jsantley We tend to see the middle ages through the Victorian lens, as the low end of a linear progression. Hence “middle ages.”

This statement accurately goes to the heart of what qualifies a video game setting to be ‘Medieval+’.  Just as Raj noted that we often see the birth of the modern in a European setting, so too do players see in the world of Skyrim a sort of idealized ‘European’ precursor to what we envision as ‘modern’. 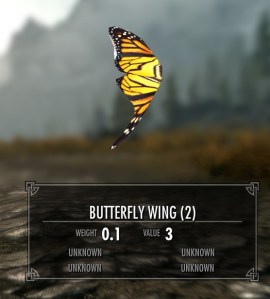 Take, for example, the process of collecting herbs and turning them into potions.  In Skyrim, there are dozens of herbs and ingredients the player can come across during their varied journeys; mountain flowers, troll fat, and even butterfly wings are just a few examples.  Each herb or ingredient has four ‘properties’ (damage/restore health, resist shock, improve smithing, etc.) that are, at first, unknown to the player.  By eating the herbs and ingredients players can learn the first of four unknown properties, yet to learn every property requires using that herb or ingredient in the creation of potions via Alchemy.  Essentially, the deeper knowledge locked within the herb or ingredient cannot be known- in fact, will never be revealed- unless the player moves out of the folkloric knowledge world of herbalism and into the pseudo-scientific world of Alchemy.

In doing so, Skyrim asserts that engaging in the more ‘enlightened’ practice of Alchemy is the only way to take folkloric knowledge and purify it into a more productive and useful potion.  Even more telling is that the game forces the player to use specially designated ‘Alchemy Labs’ in order to facilitate this knowledge transfer- a clear parallel to what Kapil Raj identified as an ‘enclosed’ knowledge making space.  The procedural rhetoric used in making a potion- first collect, then taste, then head to the lab to learn more- not only further reinforces the ‘Medieval+’ nature of Alchemy in the world of Skyrim, but also clearly places the making of ‘modern’ knowledge in a context removed from the true source of that knowledge- the land of Skyrim itself.  As characters level up in their Alchemical skill they can brew more potent potions from the herbs and ingredients they find, creating a cycle that serves to further obscure the ‘locality’ of the herb or ingredients knowledge in favor of the more ‘modern’ Alchemy lab.

Raj noted a similar phenomenon in the examination of the Jardin de Lorixa, or Flora of Orixa (a specific part of the Indian subcontinent), a collected set of folio volumes written by Nicolas L’Empereur in the 18th century on the subject of various plants found and their economic/medicinal uses.  Even though the volume was found in Paris, it’s origin dated back to the late 1690’s and was originally completed in Bengal before being shipped to the European continent.  Raj found that L’Empereur traveled to India in the late 17th century as a surgeon for a French trading company and while there conceived of the Jardin de Lorixa as a means to help the French utilize the foreign ecosystem’s unique plants for medical treatment.  To build his compendium, L’Empereur translated local herbal texts while also dispatching gardeners to scour the countryside and bring him back samples.  He even consulted Fakirs, religious ascetics of the region, for knowledge on unknown plants or treatments.

While quite impressive in it’s final form, the Jardin de Lorixa never caught on with European intellectuals and L’Empereur died a poor man.  Raj concludes that the medical text floundered not because the knowledge contained within was faulty or of little practical value, but rather because a high level Parisian reviewer, Jussieu, saw the text as helpful only in identifying which foreign plants held similarities to native species in France.  Without Jussieu’s explicit certification, the collected knowledge in the Jardin de Lorixa served little more than to act as a paperweight. 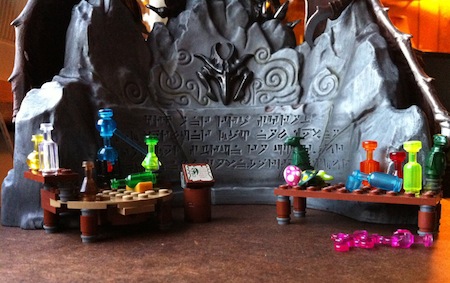 Returning to the use of herbs and ingredients in Skyrim, a similar parallel can be made between L’Empereur’s Jardin and the Alchemical process found in the game.  A player can travel to every remote corner of the game world and track down the most elusive herbs or ingredients, but in the end if this knowledge isn’t utilized at the Alchemy lab (the enclosed space of certification) it literally becomes a collective, burdensome paperweight.  From the ‘Medieval+’ perspective of the game, the potion is the ultimate valued product- not the herb or ingredient itself.  If we look to the larger metaverse of the ‘Elder Scrolls’ games, of which Skyrim is but the latest addition, then the role of potions takes on an even more homogenizing effect.  The player may find unique herbs or ingredients, but they all ultimately go into making identical potions found throughout the worlds of Skyrim, Oblivion, and Morrowind.  The procedural rhetoric involved in alchemy acts very much like a ‘Medieval+’ Jussieu, seeking folkloric knowledge only for its equivalencies and not for its own unique merits.

While this is only a brief examination of a skill subset in Skyrim, it does raise the question on how video games handle the idea of knowledge transfer in other procedurally driven play-mechanics.  If you have other examples, please leave them in the comments field below.

2012-11-08
Previous Post: Stranger in These Parts After Action Report: Did We Learn Anything?
Next Post: Epic Life: Back to Bungie 3