Problems of Prestige, part 1: the World of Homeric Warcraft

One of the most interesting aspects of MMO culture is that of prestige, and we can find a parallel in the ancient Homeric world of Achilles and the Trojan War. In this series, I will look at how prestige factors into the value system of both cultures and consider the problems this understanding of worth encounters in a sub-culture that exists within a larger society that values individualism and equality.

In many MMOs, the reward for some feat of skill is often an element that is visible to others in the game world. For example, in World of Warcraft during the early expansions, a group of guild members who were the first on their server to defeat a major villain were awarded a unique title. This title was displayed before their character name and was thus visible to everyone else on the server. In one glance, their skill and thus worth as a player was visible to any passer-by. One example here is the Death’s Demise title which was bestowed on the 25 players who managed to defeat Yogg-Saron at the highest level of difficulty for the first time on their server. 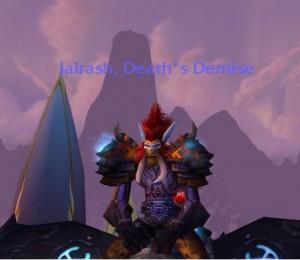 Similarly, in PvP, a player who was successful enough in arenas to reach a certain rating was then able to purchase armor for their character. In particular, shoulder armor was only available at a relatively high rating and was the most visually prominent piece of armor. This means that should you see someone walking about the city wearing this piece of shoulder armor, you immediately knew they were successful at PvP and skilled at playing their class. Their value as a player was literally displayed on their shoulders.

These visual signifiers of skill are closely linked to the underlying value system of prestige that plays a large role in the culture of MMO players, particularly those involved in the more competitive aspects of these games. For many more casual players and outside observers, this fascination with visual displays of skill can be misinterpreted as an attitude of elitism or even classism. (Unfortunately, this is not always a misinterpretation in fact.) However, if we compare this kind of interest in visual displays of skill with Homeric ideas of honor, we can come to understand that what is really happening in these MMO games is a cultural value system that conflicts with more pervasive notions of individual worth and equality that are prevalent in modern society outside of MMOs.

In the Iliad, we are given a representation of a society that has a value system also dependent on visual signifiers of personal worth as defined by a community. The great argument between Achilles and Agamemnon that begins the epic is ultimately based on the question of Achilles’ worth to the community as calculated by the geras (prize) that Agamemnon has stolen. Agamemnon’s theft of Achilles’ prize is the theft of Achilles’ honor and as such is the theft of his worth to the community and therefore his own individual value. The value afforded by the community is intimately linked with the individual’s understanding of personal worth.

Similarly, in MMOs, personal worth is dependent on values that are represented by visual elements displayed to the community. It is only through this communal aspect of visibility that value is ultimately acquired and proven. Individual and personal understandings of worth matter little to not at all in this culture, and equality is left by the wayside in favor of visible hierarchies and communal understandings of value.

We can see another obvious example of this in features like Facebook likes where the value is not in the item displayed itself, but in the worth afforded it by the community. In RIFT, the housing system is set up similarly where housing locations that have been built by players are awarded “+1’s” by the community and displayed to everyone. The locations themselves may be special to the individuals, but the true value of these places is decided by the community instead.

While our larger culture may believe that individual worth is dictated by one’s own pride and moral compass, the sub-culture of MMOs has a more communal understanding of value. In later posts, I will look at how this interacts with notions of equality and the resistance of the larger sub-culture to this aspect of limited visual capital dictating a player’s worth. We will also look at how these games have attempted to compromise between these two value systems within the culture.