Why is it that when we set out to talk about history and play, we always end up talking about games?

One thing that attracted me to the blog you’re reading right now, besides the terrific set of co-conspirators Ethan has assembled, was its title and the broad set of topics that title implies. Play the Past, not Game the Past.

Don’t misunderstand me: I love games. I identify, at least when cornered, as a gamer. And I know that “game” is a capacious label, covering everything from peek-a-boo to Axis & Allies. Yet more and more today the word “game” describes a commercial product, a highly structured and packaged, usually digital, experience. (Let’s not even get in to “serious games”–I’ll save my issues with that term for another post.)

The world of play is so much bigger than the world of games. Can’t our thinking about history at play be equally broad?

I commend to you the romance of the action figure and the playset. 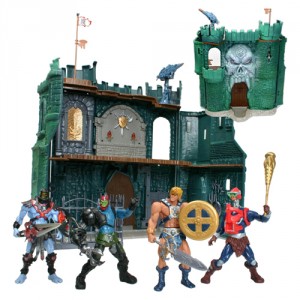 I trust you know what I mean by a playset. It’s a toy building or vehicle, often opening up to a cutaway view, a proscenium stage on which our little plastic heroes perform their scaled-down dramas. The Ewok Ghetto from Star Wars. Barbie’s Malibu Dream Bordello. G.I. Joe’s Jungle Bunker with Spiderhole. (“Action figure,” by the way, was a term cooked up in the 1960s to sell G.I. Joes to boys without having to utter the dreaded word “doll.”)

Game scholars sometimes distinguish between two modes of play, ludus and paidia. (The terms come from Wikipedia French sociologist Roger Caillois, and are always a hit at parties.) Ludus describes structured, rule-driven, competitive games, while paidia describes unstructured, improvisational play. Professional sports are mostly ludus; playing make-believe is mostly paidia. Too much ludus and a game can become a grind; too much paidia and an activity can feel pointless. Left to their own devices, children and others skilled at play will typically introduce paidiaic whimsy into ludic games (arf arf, my Monopoly dog is biting your Monopoly hat!) and ludic challenges into paidiac play (you can’t step on the black tiles–they’re lava!). The two modes are really poles on a spectrum, and maximum fun seems to be a moving target somewhere in the middle. 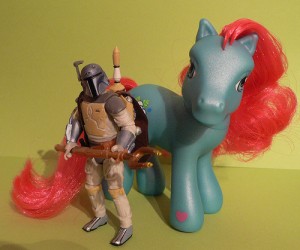 The playset, for me at least, occupies a sweet spot on the spectrum from ludus to paidia, and also on the spectrum from abstraction to specific representation. A playset is not a game. It doesn’t come with rules or an objective. But its combination of character and setting, or action figure and ground, is pregnant with a million possible stories and adventures. At our house, it’s the playsets that are in constant use. Not the structured board games, not the electronic toys that play for you, and not the austere modular blocks.

Commercial and cultural factors have, I think, pushed the computer game industry way over towards the ludic end of the spectrum. Hardcore gamers want and expect ludic challenges. Yet many breakout hits (think of The Sims, Guitar Hero, even Grand Theft Auto) leave room for highly paidiaic forms of play. Will Wright describes his greatest hits (SimCity, The Sims, Spore) as “toys” rather than “games,” and their freeform possibilities are a lot of what make them open and accessible to a wide audience. 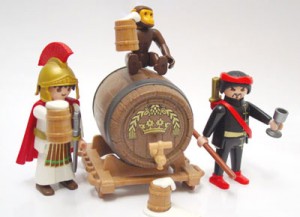 Michael Chabon has a lovely essay on Lego (it appears in his book Manhood for Amateurs) where he calls “the old familiar crunching” of Lego bricks and blocks “the sound of creativity itself.” After noting, and at first lamenting, Lego’s shift from the chunky, lo-res bricks of the 1960s and 70s to the Technicolor precision of today’s “trademarked, conglomerate-owned, pre-imagined” kits, Chabon has a surprise ending:

I should have had more faith in my children, and in the saving power of the lawless imagination. … Kids write their own manuals in a new language made up of the things we give them and the things that derive from the peculiar wiring of their heads. … When he was still a toddler, Abraham liked to put a glow-in-the-dark bedsheet-style Lego ghost costume over a Green Goblin minifig and seat him on a Sioux horse, armed with a light saber, then make the Goblin do battle with Darth Vader, mounted on a black horse, armed with a bow and arrow. That is the aesthetic at work in the Legosphere now–not the modernist purity of the early years or the totalizing vision behind the dark empire of modern corporate marketing but the aesthetic of the Lego drawer, of the mash-up, the pastiche that destroys its sources at the same time that it makes use of and reinvents them.

This kind of bricolage (get it? Lego? bricolage?) is what I imagine when I talk about playful historical thinking. You root around in the drawers of the past. You pull out whatever seems useful, or interesting, or beautiful and pointless. You reenact the narratives of your culture and you tell new stories with the resources at hand. You mix and match, snapping Skeletor’s head on Barbie’s body, or swing music onto Nikola Tesla. You snap together action figures and eras, playsets and paradigms, myths and memes.

That’s what I want from historical play. Not a first-person shooter that immerses me in a way-cool World War II movie. Not a world systems simulation that trains me to think like Walt Rostow. I want emergent, infectious, recombinant histories.

Games are great, don’t get me wrong. But where oh where are the history toys?

[Parts of this post were revised and adapted from two older posts on my weblog, Old is the New New.]