Sid Meier’s Civilization is one of the most-loved franchises in gaming, particularly among those with a historical bent, even though it doesn’t provide a realistic narrative of history. The latest iteration in the series came out a few months ago and adjusted many aspects of play for better or worse depending on whom you ask. The lead designer for Civ 5, John Shafer, once said that if you took the history out of Civilization, you’d still have great gameplay – it just wouldln’t feel as familiar. Now, he said this in a kind of defense for why Civ isn’t historically realistic, but I want to unpack his statement a bit and challenge the underlying assumptions.

Would Civilization still be great gameplay without the history?

First of all, where is this history? I loaded up the game the other day and chose a random civilization instead of hand-picking my leader. I ended up with Washington, Leader of the Americans. The window that popped up to tell me this spoke of how the United States arose in the 18th century, etc, etc. It then said, it’s 4000 BC, can you build a civilization to stand the test of time? 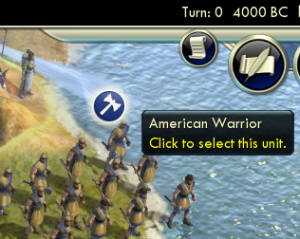 I chuckled. Here was a clear example of how history provides only a context for the game. When I look at the map in 4000 BC and see an American warrior, it does feel familiar but it is far from a recreation of the past.

Another area in which history provides perhaps only a design framework is that of the social policies, Civilization V’s new governmental system. These policies encompass various different traits of governments and fitting bonuses for each. For example, one begins the game with the option to specialize in Tradition, Liberty, or Honor. Each is designed to provide bonuses to a particular playstyle – Tradition for small empires, Liberty for expansive ones, and Honor for those with militaristic aims. It is only after reaching different historical milestones (Medieval Era, Renaissance Era, etc.) that more options in social policies open up. It is not until much later in the game that the Democracy policy is available, for example.

This kind of system is based on a linear view of history that sees human progression march along a timeline, starting with primitive forms of government and leading up to much more detailed and nuanced systems. At first glance, we may find it familiar that Monarchy is one of the first options, while Democracy is buried deep in the policy trees. But, actually, democracy was present 2500 years ago and there are still monarchies today. History is more complicated than this model of government makes it seem, despite the familiarity present in its design. I should say here though that this social policy model, new with Civilization V, provides much more freedom of choice than its predecessors. Although democracy is deep in the tree, Republic and Representation are available early on if one chooses to prioritize Liberty. Slavery, however, is not even present as an option anymore. 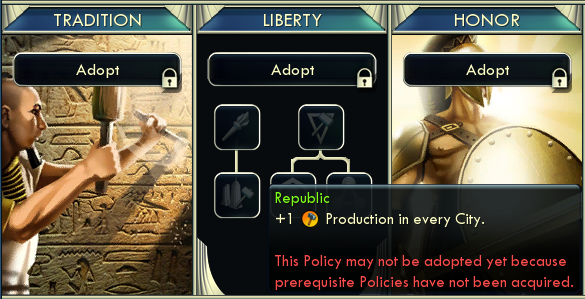 Civilization V changed many aspects of the series, but one feature in this iteration is completely new – that of City-States. These cities on the map are individual states (as you may guess from their name), but they do not compete to win the game. They exist to provide diplomatic and physical benefits to those countries who ally with them. Although their gifts of resources and military units are helpful, the City-States’ real power exists in their diplomatic ties. A player may be able to acquire resources elsewhere, but the diplomatic repercussions of abandoning, or worse, making a puppet out of a city-state, even one you’ve never been allied with, have the potential to be traumatic, while the friendships one builds up over time may dissuade a larger and more dangerous civilization from attacking you.

City-states themselves do not change over the course of the game (6000+ years). They acquire a few extra tiles of land, but aside from that, they never progress. Here, again, history provides simply a context for a gameplay mechanic. This one, though, is less familiar to us than the others. What city-states can students name? When I teach Greek history, the concept of a city-state is typically new to them. Even to one familiar with the concept, it is somehow more difficult to reconcile Budapest or Venice as a city-state in the modern age than it is to see Washington in 4000 BC. 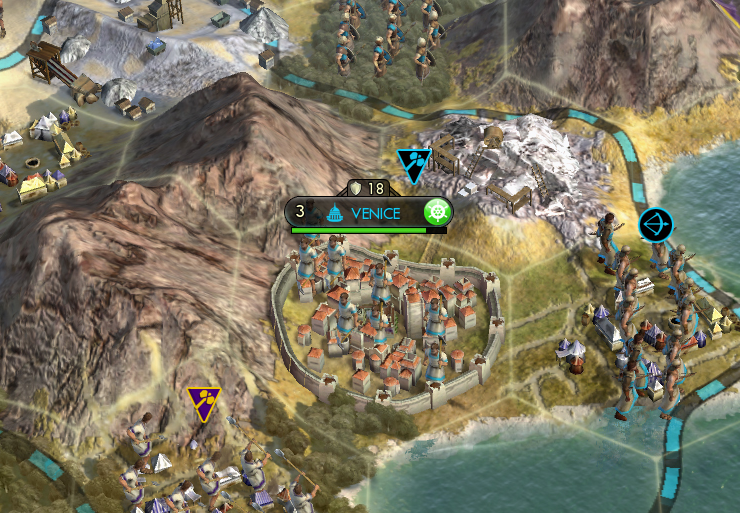 The mechanic of a city-state in the game feels a bit unbalanced and somewhat shallow. Is that because it is a poor mechanic or because we as players are unable to give it meaning from a familiar context?

So then, we have two extremes. Either, something is familiar and we gain some pleasure from playing it as I do when I am Washington in 4000 BC, or something is unfamiliar and it is more obvious as only a mechanic in the game and lacking in a depth of meaning. Somewhere, there is a line that is crossed where history is no longer part of the play, but only a framework. I think this is what Shafer missed in his statement. Part of the reason Civilization’s gameplay is so great is because part of the play is history. The pieces we move on the board are nuggets of real history, even if the narrative at the end of the game is nothing like the one we read in our textbooks.

One of the aspects of Civilization that makes it so loved among history nerds is its ability to immerse us in history. Civilization can never provide the depth of a Gibbons, but it can provide a framework for learning history through play, a storyboard for comparison and discussion. Here are three topics you may wish to consider in your next play session or with your students:

Civilization is a game. Its greatest strength, perhaps, is its ability to take history and make it into a plethora of play pieces. Within this game, history is more than just context. History is the material of play.

For more reading on Civilization, check out this post where another of our writers speaks about Civilization IV in the classroom.