By: Jeremy Antley
In: Articles
With: 4 Comments

Rob Zacny, a freelance writer who often specializes in computer games, recently wrote a piece for the new GameSpy series ‘Command Lines’ titled ‘Quick-Loading Kills Strategy Games‘.  Detailing the practice of using save games and constant re-loads to overcome obstacles found in many strategy games, Zacny states that not only is this practice ruining strategy but also encourages lazier game design.  It’s a good read that asks some interesting questions about the impact player culture has on the larger question of game design and mechanic implementation.  I want to push this analysis a bit further to discuss larger themes of how player culture impacts the actualization of play and how the ‘quick-load’ issue raised by Zacny points to general questions on the interactions between game players and game designers.

Take this quote from Zacny:

“When we start rigging outcomes by reloading after suffering setbacks, we are cheating ourselves.  If the heart of a strategy game is interesting decisions, it is their consequences that give those decisions meaning.”

Zacny goes on to state that strategy games don’t work if players constantly re-load in order to ensure success.  As a long time player of the Civilization franchise, I am certainly guilty of this crime.  My desire to achieve absolute control over the situation means I can’t or won’t tolerate ‘chance’ events that could disrupt my larger play goals.  While I’m trying to build a perfect narrative, I have, in effect, robbed myself of any narrative at all by eliminating the possibility of deviation.  Zacny echoes this sentiment when he states that this ‘perfect narrative’ made possible by re-loading is anything but as the aim of strategy games is to provide interesting decisions- and the consequence of those decisions are what create meaning.

When I tweeted this thought a few weeks ago, Sunny Moraine (@dynamicsymmetry) responded with the following: 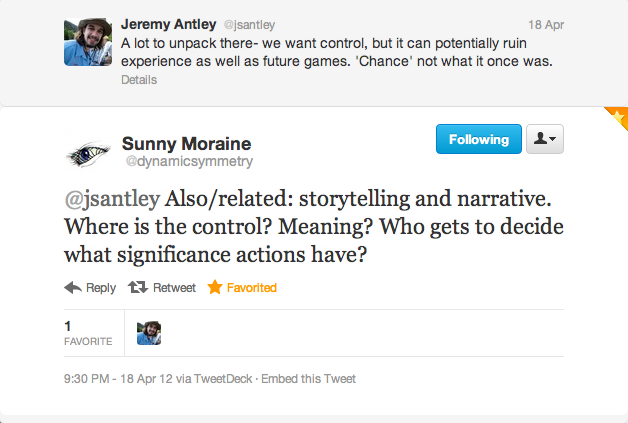 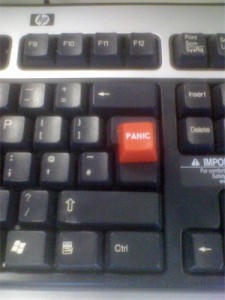 This last point is made clearer if we briefly leave the world of games and enter the reflective mode about games found in literature.  Steven Belletto does this in his book ‘No Accident Comrade‘ through a discussion on the use of ‘chance’ narratives, linked to the emergence of Game Theory in 1950’s popular culture, as found in American writing.  Analyzing Robert Coover’s novel ‘The Universal Baseball Association, Inc., J Henry Waugh, Prop.’, Belletto details a scene in which the narrator, while playing through a fantasy baseball setup of his own design, enacts revenge for having his star player killed by an errant bean ball, produced by the narrators own roll of three ‘ones’, by ‘killing’ the offending pitcher later in the season through a purposeful roll of three ‘ones’.  Belletto states:

“…the results of Waugh’s intervention are paradigm-shifting because a chance roll was converted into a willful strategy. The novel is about the veils between fiction (or myth) and reality: once Waugh intervenes to adjust the dice, the characters in his universe intimate the guiding hand of the Association’s author, and deify the players involved.”

The implications of this ‘willful strategy’ become apparent later on:

“The Universal Baseball Association, baseball functions as a metaphor of both religious control and of the control of game theory: “the canonical form of M,” like the M-Game in Solar Lottery, alludes to minimax, the notion of balance and equilibrium, so that “old strategies, like winning ball games, sensible and proper within the old stochastic or recursive sets, are, under the new circumstances, insane!” (148). In a world in which Waugh has loaded the dice, former normative standards (“old stochastic or recursive sets”) become irrational-“insane”-because the rules of the game are no longer chance governed. While manipulating the dice is a way out of the “loneliness” that came when “pattern dissipated, giving way to mere accident,” this control of accident has religious reverberations, as well as secular ones.”

If we extend this idea to the play-design mechanics found in many strategy games, then we can begin to see why players would embrace constant saving and re-loading as the control these actions provide make the ‘old stochastic or recursive sets’ found in the design of strategy games cease to be normative.  They become, in fact, insane from the players point of view.  Again, Zacny points towards a players comprehension of this insanity when he brings up the ridiculous challenge of attempting to beat the more difficult levels of Panzer Corps or the Total War franchise of games:

“It’s not hard to see that high difficulty settings…are predicated on the expectation that players are reloading to achieve perfect victories, or else are superhuman.”

Another angle to this player/design-mechanic relationship implied in Zacny’s article, but not stated explicitly, is that ‘quick-loading’ is a phenomena largely found in single-player games.  With multiple players the issue of ‘quick-loading’ largely disappears.  This is because the challenge the AI once provided is now substituted by the most challenging player of all- another human mind.  Zacny suggests that perhaps strategy games could embrace something akin to ‘hardcore’ or ‘iron man’ modes that simply don’t allow saving in the middle of a mission.  Unity of Command, Zacny mentions, accomplishes this task extremely well due mainly to its execution of challenging design through short bursts of play- a level is short enough that trying and failing a few times generally doesn’t discourage the player.  There is another example, a way out of the ‘quick-loading’ problem, that I would like to quickly discuss- that being the design philosophy found in the design of the popular horror game Amnesia: The Dark Descent.

At a GDC Europe 2011 presentation titled ‘Evoking Emotions and Achieving Success by Breaking All the Rules‘, Thomas Grip, the project manager of Frictional Games, detailed the core design choices the Amnesia team made in production.  Essentially, the entire thought behind the choices made centered on the idea that the game shouldn’t punish the player for making a wrong move- it should let the player role-play instead.  For example, while many horror games use the fear of character death as a driving mechanism for creating tension and immersion in their game world, Amnesia specifically does not penalize the player for ‘dying’.  If a player fails to accomplish a ‘chase sequence’ (in which a monster attempts to hunt down the player) or finds difficulty in evading the placement of a particular enemy (brought about by passing a certain point or picking up a particular item) two times in a row, the game will remove that obstacle from the players path and move it to a different part of the game.  The challenge is still present, yet the trial-and-error approach is removed so that even if the player realizes the penalty for dying is very slight (like the quick mission approach embraced in Unity of Command) they still are immersed in the game world and find no need to utilize constant saving/loading to achieve success.

Now I realize the mechanics and design decisions found in horror games differ from the sort of strategy games Zacny describes in his article- yet the fundamental issue of player interaction with the design-mechanics holds true for both genres.  Perhaps the solution to the ‘quick-loading’ issue is to focus on giving the player permission to cede the need for control through mechanics that create deeper immersion and less realization of the trial-and-error process that many strategy games take as a bedrock in their design. The ‘quick-load’ may be killing strategy games, but until designers address the more fundamental issues inherent in player interactions with meaning and narrative in game play, the ‘quick-save/load’ will remain a shortcut towards providing challenges that only partially compensate for the lack of control players feel.

2012-05-10
Previous Post: Hegemony: Philip of Macedon and the Inspiration of Simulation Games
Next Post: Jamestown Adventure: Less is More