Found in Translation: Age of Bronze

Some of you may know I’m currently working on a digital translation of Euripides’ Medea. Originally a play in the 5th century BC, it has seen itself revived many times, not only on the stage, but also in film. I am now introducing it through an even more modern medium by presenting it in Inform, a program used to create interactive fiction. 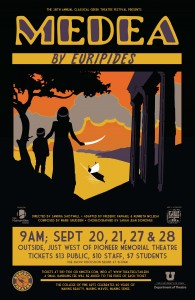 I am hardly the first to be asking these questions. Eric Shanower, the creator of the well-known graphic novels Age of Bronze is another who has had to wrestle with the same problems. His work is admittedly much broader than mine in that it incorporates versions of the Trojan War story that span thousands of years and thus has no single text as its base. In a recent publication, Classics & Comics (eds. Kovacs and Marshall), he speaks about the choices he had to make as he was writing the story. One example in particular I find striking because it raises the questions of the boundaries of medium and the mutability of story.

In this chapter “Twenty-First Century Troy” , Eric talks about how he decided to tell the story of Iphigenia. For those of you unfamiliar with her tale, let me briefly tell it. Agamemnon, the leader of the forces who sailed to Troy, once killed a deer in a sacred grove and claimed to be a better hunter than Artemis herself, Goddess of the Hunt. In punishment, she stopped the winds during the voyage to Troy and told Agamemnon via seer that he would only be able to reach Troy if he sacrificed his daughter Iphigenia to her. Agamemnon sends for his daughter, saying he plans to marry her to Achilles. She arrives with her mother who refuses to be absent from the wedding and thus discovers Agamemnon’s true plan. After much drama, Iphigenia eventually makes the choice to willingly die honorably for the sake of the war. In some versions, Artemis saves her at the last moment, placing a deer on the altar in her place.

Eric says, “When I reached the part where fourteen-year-old Iphigenia agrees to die selflessly for the greater glory of Greece, I had a problem. With great actors and a receptive audience, maybe that works on stage. But in a comic book? No way!” His solution was to take versions of the story from the 17th and 18th centuries in which Iphigenia is in love with Achilles to then adjust the story to fit his audience and medium. Either he is assuming that comics are limited in the kinds of stories they can tell or that readers today are limited in the kinds of stories they will accept.

We all know that interpretations of stories change throughout the years, but do stories themselves? As readers change with their cultures, do the stories they are able to be told change as well? We study ancient literature for many reasons, but one of those has traditionally been because it tells us something about the human condition. In it, we can find insights into not only ancient people and their thoughts, but our own as well. I find it somewhat problematic to assume that a story of a 14-yr-old girl dying for honor would be a stretch for us. 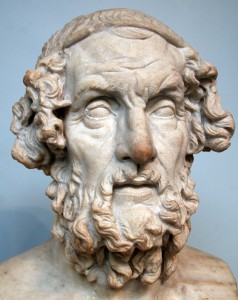 Believable or not, the story of Iphigenia’s death for honor exists simultaneously as the one saying she died for love. This is just one example from the whole telling of the Trojan War. If someone’s first introduction to the Trojan War is in the Age of Bronze, how different will their reception of the Iliad be? This kind of “post-primary” experience, as I like to call it, fascinates me. We are so used to prioritizing “first” over everything else that we forget how “first” can have many different meanings. So what if the Iliad came first? If my first is your second, our readings are inevitably, forever different, colored by our own unique pasts of reading.

Some may use this as an argument against the kind of story-melding Shanower does in his work, but I think it would be more productive to look at this as an example of how we actually understand stories. Even when we go back and adjust our first readings based on later understandings, that initial (primary) interpretation still exists, affecting its own reinterpretation. Our readings are not just influenced by context – our readings are context and continually influencing each other in a kind of fluid exchange.

What if someone never reads the Iliad though and goes through life thinking Iphigenia died for love. What if their first understanding of Iphigenia is never re-interpreted by later encounters with her story. Is that so bad?