I stumbled upon this delightful image while browsing the web for some project of mine. It prompted me to start wondering just how much of the game frameworks we spend so much time in have impacted our worldview. Occasionally, I’ve thought of my own needs in terms of The Sims – maybe I’ve been working at home too much and my social bar gets low, for example. Achievements though are something more powerful. They are not just a skin placed on an already present condition. Rather, they are a reward system for navigating the world.

Gamification in most aspects of life has become a hot topic of late, but I often question its value, particularly in regard to achievements. Shawn Graham wrote a piece a bit ago about how he is using game systems in his classroom. When he presented this at Great Lakes THATCamp last month, there were some hesitant and skeptical responses. Are we just reskinning systems that are already in place? And if so, is that actually valuable? 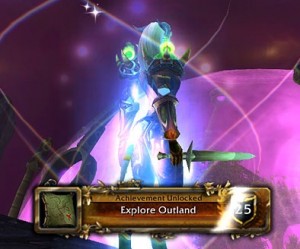 Achievements do have some valuable characteristics. For example, they can sometimes drive experiential narrative and encourage alternate play habits in games (i.e., PvP in addition to PvE). They can keep players playing, inspiring them to accomplish goals they perhaps once thought out of reach. This all-pervasive system of badges and points, however, can also drastically change a player’s value system within the gameworld. An experience that is not captured by some achievement may have exponential value for the participant, but for everyone else in the community, it is valueless. There are no points, no gold banner, no badge attached to the accomplishment, so it isn’t really an accomplishment.

Further, although achievements may encourage players to experience parts of the game’s story universe that they wouldn’t have otherwise, the system can also remove some of the potential value of those experiences by quantitatively labeling them and potentially encouraging the player to value the achievement itself more than the actual experience. Instead of enjoying an encounter for its mechanics and challenge, it instead becomes a means to an end, namely, a kill achievement. Gimmicky strategies are used simply to game the achievement system and acquire its gifts of prestige. The game becomes a meta-game of points in which the content only plays, at best, second place.  There may come a point where the game itself doesn’t even matter – just the ding of another achievement. 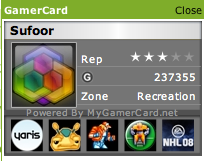 As I near the end of the Spring Term and await the pile of exams I will grade at the end of this week, I cannot help but think of achievements in terms of class grades. Gold star. A+. Congratulations, kids, you just added to your GamerSc…I mean StudentScore! But did they learn anything? When more time is spent sending emails to one’s professor asking for a better grade than is spent reading feedback and thinking about their paper’s argumentative flaws, I have to wonder if achievements, I mean grades, are working very well at all. Perhaps it would be more useful to think of gamification not as a re-skinning of systems already in place, but an opportunity to change those systems. The true value of learning from games comes not from the reward system after all, but from the system of play.

Achievement systems do not teach us material anymore than they make us enjoy content. Rather, they teach us how to game the system to acquire maximum points, letting the content, whether of game or class, become merely part of the scenery. Game systems in the classroom must be approached with care. Although powerful, too easily they can become just another meaningless act in the meta-gaming pursuit of a higher academic score.