Librarians, Archivists and Curators According to Magic the Gathering

By: Trevor Owens
In: Articles
With: 5 Comments

I have pulled a few examples out from the game Magic the Gathering, but I would be thrilled to have readers share examples of libraries, archives and museums and librarians, archivists and curators from other games in the comments on this post. 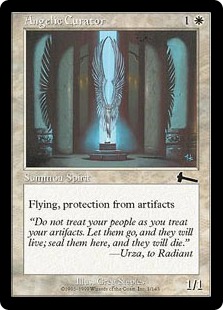 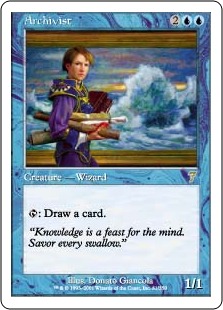 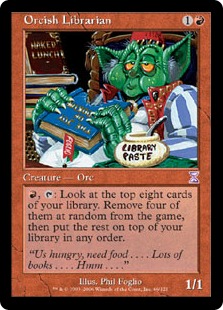 Magic the Gathering has a Curator, Archivist, and Librarian in it. The Archivist and the Librarian have functions related to drawing cards, which in the practice of the game has the effect of making more knowledge available to the player.

For those who haven’t played Magic the Gathering, the general premise of the game is that you and your opponent  are wizards. You each have a “library” of spells, artifacts and land (represented by the deck of cards, I like to imagine it’s like the deed to the land or something) which they draw from to do battle against each other.

In the logic of the game, the Archivist let’s you draw an extra card every turn, and the Orcish Librarian (apparently because he is an orc) is a terrible librarian who can let you look at what cards you have coming up in your deck but then removes half of them at random from the game (from the card it would appear he is eating some of your books).

The Angelic curator, in contrast, has nothing to do with drawing cards. It’s is a flying spirit that is immune to the effects of artifacts. I imagine his immunity comes from it’s extensive knowledge of artifacts.

So, What are your favorite examples of libraries, archives and museums and librarians, archivists, and curators in games? Beyond that, what do you think their operations in the game say about what cultural heritage and memory organizations mean in contemporary society?

Also, what do you make of these cards? What do you think they say about how we think about different kinds of cultural heritage organizations?

2013-07-31
Previous Post: The Past as Played and Lived Reality
Next Post: The Othering of Time in Age of Empires II