I’m often asked by colleagues who know my interest in games in education to suggest a game students can play that will teach them some particular set of knowledge or skills. “Do you know any iPad games that can teach quadratic equations?,” or “Has anyone made a game about conjugating Spanish verbs?”

While these games may possibly exist, I’ve come to rely on a different approach to using games in education.

Through my interest in the digital humanities, I’ve had the great joy of participating in THATCamps from time to time (one of which is specifically organized around the subject of games). What I discovered early on in my discussions with digital humanists in general was an interest in the use of games “as text.”

I simply had never thought of games this way. I thought that in order to more effectively integrate play into our K12 curricula, we needed to make better educational games. An incredible number of my K12 colleagues presently feel the same way. These games would need to somehow keep up with the levels of development of the games rolling out to the XBoxes, PCs and mobile devices to keep up student interest. While I’m aware of a growing success in this strategy, I can see more benefit in the integration of commercial, “off the shelf” games in the K12 classroom.

How can we use games to promote authentic activity, critical thinking, and creativity? We can’t use Carmen Sandiego or Oregon Trail, we have to capitalize on the rich cultural and narrative characteristics and intensive interactivity of video games intended for the general marketplace.

I’m beginning to see many of the activities in which students participate in in class, like taking notes or outlining the Declaration of Independence as a sort of “2D” world. There are certainly important dimensions to the experience- the aquisition of knowledge and skills, the ability to communicate, the social aspects of education- but something authentic is missing. Playing, thinking about, talking about, writing about games, I believe, expands activity to another dimension- one that includes creative and critical thought, as well as what Ian Bogost terms “procedural rhetoric.”

Rather than training students to identify and practice the strategies of rhetoric through reading and writing, what if a media existed (and the students regularly engaged in it) that communicated ideas, arguments, and points of view through its procedure, rather than in a linear set of carefully structured arguments? In this case, learning is at least 3D- it includes the dimensions of experience, agency, and action.

What if these “procedural” experiences became the basis for the aquisition of knowledge, the application of that knowledge, but also the evaluation of the “procedure” for effectiveness and/or authenticity? What if students countered an inauthentic or ineffective experience by creating one of their own?

While using games in my classroom, I’ve noticed a few generalities about how students percieve games. Firstly, many students experience games as consumers, they don’t often register the existence of their own agency in game outcomes. Secondly, they don’t generally think of games as someone’s product- a product in which every facet has been deliberately and often thoughtfully crafted. Thirdly, despite #2, they have difficulty grasping the incredibly deep thinking, creativity, and logic that goes into the construction of a game.

I see some parallels with the “2D” world of text work in the classroom. I don’t think that in many cases students read (or think that they read) assigned text in a cognitively “active” fashion. Secondly, I talk to a lot of English teachers who struggle to get students to understand the careful choices authors make in their craft, and how their work is a reflection of large number of influences.

It’s in the third generality that I think reading/writing and game playing/game making diverge. One must account for the fact that games include sound, video, graphics, and most importantly, user choice.

I’ve thought quite a bit about what the structure of a game-based activity/unit would look like in the classroom, and how it would relate to traditional educational thought. So I’ve “modded” Bloom’s Taxonomy. (image) 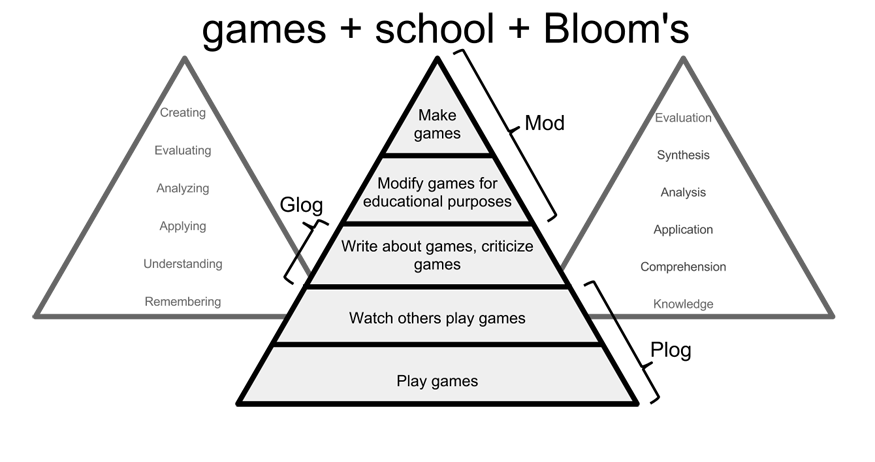 So, having students play games, and then communicating about the experience (called “plogs” by someone who I shamefully cannot remember) is similar to operating at the “knowledge” level in the original taxonomy. Watching others play games is more of an evaluative experience, and therefore belongs higher up the taxonomy. Taking those evaluative thoughts and processing them into formal arguments (“glog”- a silly word that I believe is entirely my fault) involves more complex thought. The fact that my pyramid is topped by two acts of creation reflects a recent movement of the interpretation of Bloom’s Taxonomy from evaluation (older version of Bloom’s represented by pyramid at right) to creation (newer version at left) as the supreme educational experience.

What are some examples of the uses of commercial games “as text?” Here is a list of games and the Social Studies- related focus that students in my classes used to play, analyze, and sometimes modify games.

Thinking about using games, gameplay, or perhaps just discussion of games in class? I find a great way to start is by finding out about the students and what they are playing. I usually use a Google Form to collect information on what game genres they find interesting, which exact platforms and titles they’re most likely to play, etc. This is a great way for me to both discover new games and to find out what sort of genres and/or games students are already predisposed to criticize or praise.

From there, I have students each of the people, places, differences, etc. on index cards- usually color-coded for easy use. I’ll then add another category- games- and write each of them on index cards. I then have the students do the following:

I’ve used this task design repeatedly, to be sure that students (ideally) thinking deeply about their learning. The task of game creation is alone a highly evaluative and complex procedure- it requires creativity, but within a teacher-constructed fence. The fence is a framework for innovative processes. The authenticity phrase is the content of the unit.

So, each group of students working together receives a stack of index cards, one card from each of the categories, including a card with a game written on it. Students then have a set amount of time to “pitch” a game to a game publisher that uses all cards. I also sometimes allow a certain amount of time for card trading (only between the same categories), and have introduced the use of wild cards to swap out a card for a different item in the same category (i.e. swapping Themistocles for a card that has Plato on it).

After students are relatively good at the details of the exercise, and can commit more thought to their games’ creation, I introduce the idea of “game mechanics” and encourage them to create “authentic” game mechanics. I see authentic game mechanics as something done by players in the game that reflects a historic authenticity. Just this year, during our game jam for the end of the Ancient Rome unit, a group of students modded Monopoly and added an authentic mechanic- as you play, you can decide to become a follower of another player, following that player around the board once, reaping the benefits of that player’s fame and fortune. Of course, it also follows that you could also follow that player off the Tarpeian Rock.

I find when students have an understanding of the way games are created, they are often better at criticizing games. In my AP Human Geography classes, we have a unit on identity, and I find that my students have a particularly tough time looking at race and gender through an objective lens. So, like many digital humanists before us, we have a critical go at video games.

In this activity, I use the same task design as the game jam:

Our targets are MMORPGs, particularly ones that have “races.” This year, we used the following games:

The output for their mod is usually an essay with example images from the game. This activity is also a great example of the possibilities of games in the classroom- none of my students ever play the game in class. They check wikipedia, they check out the game’s wiki, they watch YouTube trailers and character creation videos.

This year, I introduced the activity by watching the World of Warcraft: The Mists of Pandaria Cinematic Trailer once, then watching it again with discussion for an analysis of the ways in which the video portrays race.

For gender and race issues, I find PBS Game/Show video series to be excellent, particularly (for this activity) Do Gamers Need Anita Sarkeesian’s Feminism? and Are Games Racist?. I also guide students with the following questions to lead them to a critical understanding of race and gender in the games:

I find that most commercial video games fit seamlessly into almost any facet of Social Studies content, especially history. The construction of game worlds by designers, developers, and publishers is an excellent pedagogical parallel for the interpretation and reconstruction of the past by historians.

Have examples of the educational uses of games as text? I look forward to checking out the comments..