Modding Skyrim: The Value of Magic and Metaphor

Ever since its release, I’ve been a big fan of The Elder Scrolls V: Skyrim. I found its huge open world, its random environment, and specifically its material culture refreshing- it kind of fit my style of play exactly. I’m an explorer and tinkerer. I generally abhor magic, for no other pointless reason than I hope to squeeze every little bit of historical reality out of the world of Skyrim.

As a history educator, I introduced the educational uses of Skyrim to my high school students, hoping that they would be motivated to squeeze the history out of Skyrim too. I thought that Skyrim was historically broken and we as educators and students must fix it. I found examples of others investigating Skyrim’s geology, and previously on Play the Past Jeremy Antley argued that Skyrim’s alchemy was founded upon a modern, rather than medieval conception of science (Medieval+, as Antley I think sharply refers to it).

So, I led my students into investigations of agriculture (Why are there tomatoes, potatoes and corn in Skyrim? Why is there so much cheese when there are so few of those adorable cows? Shouldn’t the people of Skyrim be starving?), technology (What early Middle Ages technologies are represented in Skyrim? How are they printing all those books? Who can actually read?), and the cultural landscape (What architectural forms in Skyrim find their inspirations in the cultural landscape of Northern Europe?). In each case, I encouraged some students to use Bethesda’s Creation Kit to make mods that addressed what we found to be Skyrim’s shortcomings.

Students used Skyrim for field study- counting people, counting cabbages, counting calories. One student went so far as to cover the town of Rorikstead with hundreds of chickens. It was fun, and I think it offered students an experience that could not have existed in a traditional classroom.But every time I watched students actually play the game they never shared my strict sense of historical gameplay. They launched fireballs, used enchanted weapons, cast spells. 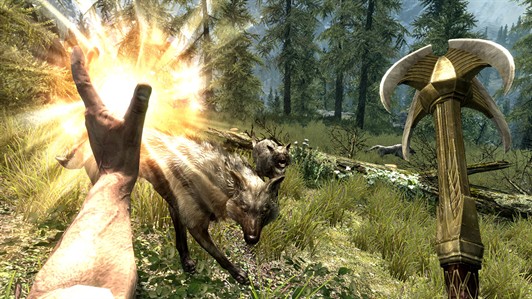 I was already at the point where I was considering developing a mod based on an actual historic event, possibly based on a primary source. What if an entry in the Domesday Book for a specific town or estate were re-created, animal by animal? What if the pseudo- Roman vs. Germanic tribes material culture of Skyrim could be easily twisted to rehash an event from the late Roman Empire?

Spending time in the classroom discussing video games with students has led me to believe in the important value of studying games “as text.” Discussing/playing/modding games that were not originally intended for educational use, I think, gives student an authentic set of analytical skills, and in the end, I think, makes them better historians.

I was becoming more interested in studying games as they are. Maybe, I thought,  there is a reason for my students’ use of magic in the game. Perhaps they aren’t actually just being pointlessly primitive and unscientific. And, most importantly, maybe magic offers the real educable moment.

I began to consider a new angle, one in which magic would be a natural part of a historic simulation.

A simulation of a historic event using a first-person game like Skyrim could mean that the player is recreating a historic role. Therefore, it is logical that the player character could hold the same common beliefs of others of his/her time period. If it’s the right time and place, magic works. Superstition is acceptable.

What are the limits of the approach? If the idea is to simulate belief, where would belief simulation end? Consider the following passage from Suetonius:

Later, when Octavius was leading an army through remote parts of Thrace, and in the grove of Father Liber consulted the priests about his son with barbarian rites, they made the same prediction; since such a pillar of flame sprang forth from the wine that was poured over the altar, that it rose above the temple roof and mounted to the very sky, and such an omen had befallen no one save Alexander the Great, when he offered sacrifice at the same altar.

If one were to create a Skyrim mod that simulates the player character attending this event as described, it seems logical that the “pillar of flame” should be digitally reproduced and experienced by the player. The player may “suspend disbelief” (my students would have an easy time with that), but the simulation has some historical value, despite the simulation of a magical event. Myths have great historical value. As, I think, Roger Travis argued successfully in this blog, myths are meant to be played.

Others have successfully modded Skyrim toward humanities education ends. Lisa Hermsen and Elizabeth Goins of RIT created a mod for Skyrim entitled “Hysteria,” based on a series of late nineteenth century stories (Goins, incidentally, very recently nailed a historically-minded appraisal of Bioshock Infinite). In this case, Hermsen and Goins report that their intent is to use their Skyrim mod as an “aggressive remediation-” of the author’s “intended affect and persuasion.” For my purposes, there’s no supernatural involved, but there is hallucination and also belief in medical treatments now proven wrong by science. Can a historic recreation be believable and/or “accurate” despite involving logically questionable events?

What are the boundaries of simulating belief? If a source complained of the inferiority of a certain group of people in an event patterned after the source’s experiences, should the modder simulate inferiority? Should metaphor be simulated?

As a history teacher, I watched the film Lincoln the way I originally played Skyrim- looking for a chance to jump on some inaccuracy. I soon sought out reviews, looking to gain some expert insight. What struck me most was Harold Holzer’s view of three of the film’s inaccuracies he pointed out earlier in his review (during the making of which he had served as a consultant):

Besides, those soldiers who recite the Gettysburg Address may simply represent the commitment of white and black troops to fight together for its promise of “a new birth of freedom.” Mary Lincoln’s presence in the House chamber may be meant to suggest how intertwined the family’s private and public life have become. The image of “Old Tippecanoe” Harrison in Lincoln’s office may be an omen for his own imminent death in office. In pursuit of broad collective memory, perhaps it’s not important to sweat the small stuff. From time to time, even “Honest Abe” himself exaggerated or dissembled in pursuit of a great cause. Just check out the shady roads he took to achieve black freedom as “imagined” so dazzlingly in the movie.

If magic and superstition may be OK in a recreation of the past, is metaphor and what is “imagined” OK too?

Another RIT article, Modding the Humanities: Experiments in Historical Narratives again briefly explains Hysteria, but also adds detail on the use of Oblivion (Skyrim’s predecessor) to teach players art conservation and art conservation science. Oblitus Artium has the character operating within the world of Oblivion (technically the same world as Skyrim, but a different region and time period), taking on “quests” that intend to teach real knowledge and skills, but wrapped within the magical realm.

Two quests developed by the team reflected two separate approaches to the injection of content and learning in interactive experiences by educators.

In the first quest, Caring for Your Collection, players are given a humorous quest which really masks a series of multiple choice/matching questions (handled by monitoring the items that players place in drawers). The designers labelled it the “chocolate covered broccoli” approach.

One of the strong lessons that comes forth in the designers’ follow up studies with player of Caring for Your Collection is the desire for players not to be hammered with strict factual questions as a part of a quest, especially if those questions have no part in a larger, emotional, and perhaps believable narrative.

In the second quest, The Pigment Analysis Quest, players travelled to and explored “a newly discovered Egyptian tomb based on the real tomb of Nefertari in the Valley of the Queens.” So, there was actual historic modification involved in some of the mod. The quest was a brilliant layering of two separate threads of content- the process of opening a tomb as a conservator/archaeologist, and the process by which Nefertari (according to sources) would have been entombed. So, the quest’s game mechanic is authentic in several ways: the process of conservation is linked to the process of entombment (which for Egyptians was about conservation). Emotional attachment to the quest becomes an amplification of the students’ desire to do well, to learn, to find out what the Egyptians thought about death, to discover the somewhat gruesome preparation of the body, and to find out what the hell is in the tomb.

As far as I can tell, although the player must read excerpts from the Book of the Dead as a part of the quest, there’s no suspension of disbelief. The mod intends to teach modern skill in entering and interpreting the tomb. However, the use of metaphor through the enter the tomb/enter the afterlife mechanic is exceptional.

What about belief in general? What about beliefs that don’t counter modern science, but that are part of a specific historical actor’s point of view? In the Red Land/Black Land Project, Civilization V was modded to permit players to play historically set scenarios from Ancient Egyptian history. As they play, they are given a range of advice by “In-Game Archaeology Learning Agents.” Each communicated their beliefs as fact- offering a specific interpretation of evidence (sometimes several kinds of evidence).

The RIT Skyrim mods were intended to teach process and skill. What if a mod intended to allow analysis and evaluation and perhaps other higher levels of thinking? What if the mod were a test of believability? How historically authentic was the experience?

Could mods be built in sets, one somewhat random, one conjecture and one based on primary sources?

I feel like the questions outweigh the answers in this post. Anyone have some answers? Looking forward to reading the comments!

2014-01-15
Previous Post: Between ‘what is presented’ and ‘how is presented’: historical re-enactment through popular culture
Next Post: Excavating Age of Empires