Prison Sims: Birth of a Controversy

By: Gilles Roy
In: Articles
Tagged: prison, simulation
With: 0 Comments

N.B. This post is an introduction to an upcoming two-part series on prison management games, and the controversies surrounding them.

It’s a fair question to ask: are prison management games any less controversial than your average violent video game? Or any opus from the Grand Theft Auto family, for that matter?

With the release of the fifth title in the Prison Tycoon series, and the crowd-funded hit Prison Architect going towards Alpha 20 (as of April 2014), what can prison management titles tell us about the treatment of serious social issues in video games?

In December 2013, Kotaku published an in-depth review and critique of Prison Architect, the prison construction SIM developed by UK-based Introversion Software. The article, a guest editorial by game designer and activist Paolo Pedercini (of Molleindustria fame), has the remarkable quality of taking Prison Architect to task in its scope and mechanics, with a view of making propositions for the game’s “editorial direction”.

The publishing of such an article on Kotaku, in itself, suggests that prison management is a controversial choice for a game, and that the designers have a responsibility in designing a game experience that should be at minimum thought provoking, i.e. not “mere entertainment”. At the outset of his article Pedercini asks:

Is it possible to create a prison management game without trivializing or misrepresenting the issue of mass incarceration? As video games mature and tackle more serious topics, players and developers should be aware of the values embedded in their systems.

Pedercini’s choice of Prison Architect is no coincidence. There is now an established tradition of deconstructing games for their messaging and their mechanics, in game studies. Play the Past contributors are part of this tradition, and regularly engage in exercise of unpacking the assumptions of games, and game genres. Because of his artist’s pedigree, Pedercini has sought to position himself uniquely on the continuum of activist game design and game studies. Thus, rather than delve into the “subversive messaging” of a GTA, or evaluate the teaching potential of history-themed games, his activist critique is a plea for the potential of games to express things that no other medium can. Indeed, Pedercini’s critique of Prison Architect articulates the hope (and expectation) that games can shed light on human power relations, because games immerse players in dynamic models of reality.

That’s a tall order, albeit, but one that is increasingly attractive for game designers. And Pedercini’s recognition of such a design motive made the developers of Prison Architect take heed.

So you wanna be controversial…?

The general discussion appended to Pedercini’s article reveals just how much writing a video game critique can be a difficult exercise. A common reprimand of the article is that a prison theme is in no way more controversial than more explicitly violent game titles, of which there are countless numbers.

This makes me wonder: have violence and sadism, in having so long the “gold standard” of controversy in video games, made us incapable of looking at controversy in any other way?

Because, without a doubt: prison management games are controversial. 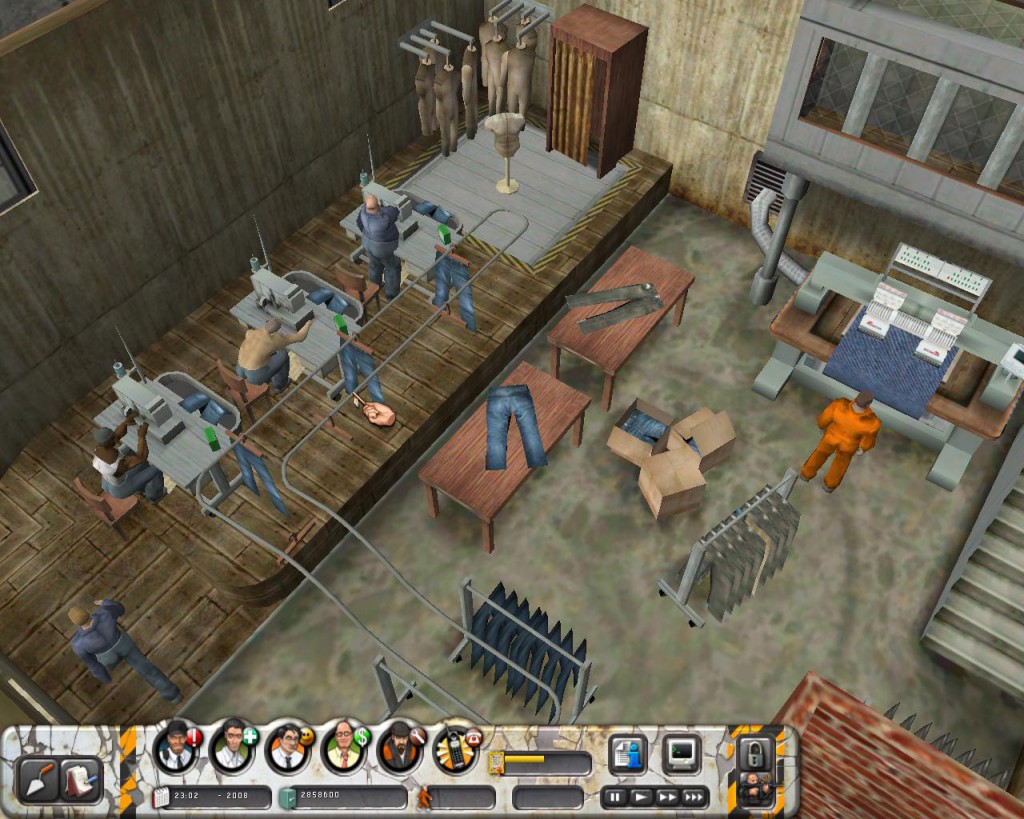 “Let me count the ways…” will be the gist of a two-part series on Play the Past on prison SIMs. Following Trevor Owen’s lead on analyzing statecraft in history simulation games, I want to propose that SIM games – and specifically prison SIMs – can provide us with a lens with which we can expose technocratic thinking. By “technocratic thinking” I mean the various schools of thought popular with our academic, business and political elites, which posit that human thought, feeling and action can be reduced to technical parameters, upon which various experts can exert some degree of management or control.

The first article will probe the social engineering roots of the SIM game in computerized economic simulations. I will retrace the path of landmark game titles that led to the emergence of the Tycoon genre, titles that helped move the genre away from its serious games roots to an entertainment format. I will then take a closer look at the ill-fated Prison Tycoon series (ValuSoft, 2005-2010), and analyze why the move to a prison theme was a risky venture for the Tycoon sub-genre, in light of the social models business SIM games seek to naturalize. At bottom, I will be asking: can Prison Tycoon remain bounded within the limits of entertainment?

The second article will look at a successful (in my opinion) adaptation of the prison theme for a management SIM: Prison Architect (Introversion Software, 2012). I will look at the ways in which the creators of Prison Architect have rebuilt the genre from the ground up, and how Prison Architect delivers an ironic twist to the technocratic fantasy of apolitical management.  Specifically, I will compare the “procedural expression” claims made by Will Wright (creator of the SIMS series) and by Introversion Software in their embedding of Maslov’s hierarchy of needs in game mechanics. In the spirit of Pedercini’s critique, I will ask the question: is it possible for a prison management “simulation” to raise awareness of issues with our prison system? Otherwise put: could a serious game publisher release, in this year 2014, a prison management simulation with a straight face?

2014-04-16
Previous Post: Teaching Games as Text: The Problem (Part 3 of 4)
Next Post: Prison Tycoon: the Broken Promise of Simulation