The Role of the Museum in Video Games

By: PastPlayer
In: Articles
With: 3 Comments

The following is a guest post from Tomas Brown. Thomas is currently a post graduate student studying Cultural Heritage and Resource Management at The University of Winchester. He is interested in the application of cultural heritage in video games, Imperial heritage and Ancient Rome. You can find him on twitter @TomTangoman.

Museums, the homes of the past, appear in a number of games for example Uncharted, Skyrim, Bioshock and Wildstar but what exactly is their purpose? This will be investigated by studying a selection of museums in video games and their roles. The museum is used in conjunction with the story, being essential to driving the plot forward. Some in-game museums are used to exhibit specific content to give the game’s world character, be it controversial, political, or both. As well as this it is also used to give the player context and a sense of pride and/or identity within a given virtual world. 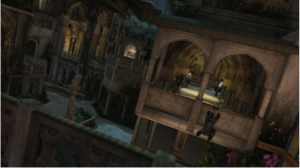 In some cases museums are used to drive the story, where it can fit into the plot as a significant setting. This is very much the case in Uncharted 3(2011) where the main character, Drake, looks to his past near the start of the game to show the player where his adventure begins. It is initiated in a museum, where the player is given the option to roam the galleries and admire the artefacts at a Sir Francis Drake exhibit in Colombia, in search for a particular artefact. Viewing every item rewards the player with an achievement trophy. At this point the museum acts as a safe haven for artefacts, in a game world where heritage and the past are often the subject of great peril and adventure, here they are simply being preserved. It also provides a significant setting for the two main characters, Drake and Sully, to meet for the first time. It’s a safe place, making them almost at home in this environment. The museum is also where Drake retrieves his ring, an emblem of his own heritage. The game’s antagonist, Katherine Marlow, also pursues said ring which provides the third game with some extended background and an origin for the story.

This is also the case in Uncharted 2 (2009) where Drake and his friends, Flynn and Chloe, break into a Turkish museum to search for an artefact which will give them a clue to finding Marco Polo’s lost fleet. Again, a museum starts as the initiation of the story line. It shows the artefacts which Drake would normally be hunting for in a legitimate context and a safe starter zone for the player, giving them a sense of security before actually hunting for the past. Uncharted therefore really demonstrates how a museum can be used as a spring board for a story. As it does more than just act as a stage, it embodies the past and the character of the world and, in a way, foreshadows the nature of Drake’s adventure.

Skyrim: The Museum as World Enrichers and Debate 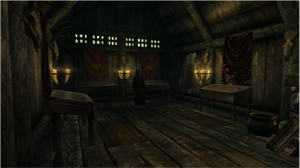 The museum is used in a similar way in Skyrim (2011) but in an open world environment. After reaching a certain level the player will receive an invite to the grand opening of a museum in Dawnstar, a small town found in the North of the region. Upon entering the town and conversing with its inhabitants the player is warned not to go near the museum, due to its controversial cult content. Here the museum is the catalyst for initiating a quest line for the player.

However there’s something more significant that Skyrim demonstrates here. It is demonstrating the power of the museum on a social level, and how some will avoid it due to its content, while others will celebrate it. A similar comparison could perhaps be drawn on the debate on whether human remains should be displayed in museums. Some people appreciate what can be learnt from the remains of past individuals while others feel that it is wrong to display the deceased behind glass, and so maybe adverse to some exhibits. I can also verify this effect from personal experience as while at an exhibit on Phrenology, which involved the display of a number of criminal’s death masks, I witnessed mixed visitor responses. Some were fascinated by them and wish to take pictures. Others appeared to take one glance and then leave. Others found more of a middle ground. They view the entire exhibit and commented on ‘how gruesome’ it was. Similar social approaches can be seen, on perhaps a more extreme level in Skyrim but it still demonstrates the social power and opinion that museums can instigate. Such an atmosphere also serves to further enhance the world’s character by showing us that the museum is not only a place of safe and dusty artefacts but also a place of controversy. Presenting the side of museums which may sometimes be pushed to the back of ones mind. 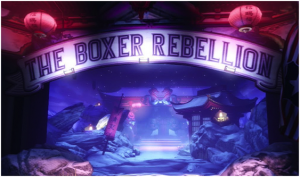 In some games the museum is used to demonstrate political beliefs and history from a particular point of view. The Bioshock series has always had strong roots in historical ideology and is a prime example in recognising the museum’s political ability. To supplement the city of Rapture’s history in Bioshock 2 (2010) a museum exists to educate the younger citizens of rapture about the origins of the city. Much of it displays the surface world as the land of the ‘parasite’ and portrays Rapture as a utopia, where life is far better. This is clearly not the case by the time the player arrives in Rapture as the city has fallen to ruin, both physically and socially. A similar concept can be found in Bioshock Infinite (2013) which sees the player traverse through an area called the Hall of Heroes which celebrates two battles in favour of the citizens of Columbia, the city in which the game takes place. The battles portrayed are the Battle of Wounded Knee and the Boxer Rebellion. Both exhibits are used to portray the city’s leader, Comstock, as a hero while heavily demonising the Native Americans and Chinese. It is truly uncomfortable to witness. But again it uses propaganda in a museum environment, presumably, to teach its peoples a select history and ensure their loyalty to the city and its leader. This demonstrates a gross misuse of the past and allows the player to better understand the history and twisted character of Comstock’s City. Overall this serves as a reminder to us that heritage can be manipulated to serve an agenda and how powerful museums can really be.

Museums can also be found in massively multiplayer online games. One example of this can be found in the starting areas of Wildstar (2014), still yet to be released but currently in beta. In this game the two factions, the Exiles and the Dominion, are available for the players to join. In the starting area each arrive at a museum (or in the Exile’s case more a cabinet of curiosities) to learn about the lore and background of their factions. Not only does this teach the player some of the backstory of the game from their side’s perspective but also serves a greater purpose. It uses the heritage of these two factions to reinforce faction identity and pride in its players. This somewhat reflects the nature of museums in the real world, as in many cases they act to remind us of who we are and where we stand in the world (Davis, 2007, 53). From playing through these areas the player gets a real sense of unity between the races on each side and instils the player with a sense of civic pride while demonising the opposing faction. This will no doubt serve to make the world, as well as the player vs player experience, much more immersive. Wildstar therefore uses the museum to utilise heritage and culture, something all can relate to, to help the player connect with the online world the game creates.

It can then be seen, in a very general conclusion, that the museum has a number of roles in video games. It acts as a starting point for the story, as exhibited by the Uncharted games. Furthermore it can be a hub of controversy as portrayed in Skyrim which adds to the world’s character. The Bioshock games demonstrate further how museums can convey the world’s nature by using them for propaganda. Additionally Wildstar demonstrates howthe museum can also be used to provide background information about the game world and, more importantly, to instil a sense of identity and faction pride in the player, enhancing their gaming experience. So all in all how do you feel about museums in video games? Can you think of anymore that fit into these categories or, better yet, sit in their own?

2014-06-06
Previous Post: Prison Architect: The Dark Heart of Every Sim
Next Post: Social Construction of Technology in Games