The Image of Rome in Video Games: My Empire (Part 2)

By: Emily Bembeneck
In: Articles
With: 0 Comments

I spoke last time in general about how the image of Rome is manipulated in video games to provide an image of cultural identity in comparison to that of America’s identity through diversity, at least in official rhetoric. Today, I will be discussing in particular My Empire, a game which offers a simple and clear view of how Rome comes to stand as an identity centered in homogenity.

My Empire is a social game playable on Facebook, one of the many casual games offered there by Playfish. In the game, players build up an “empire” (really just a single city), collect taxes, build wonders, recruit generals, and fight barbarians and pirates. Upon entering the game, players are greeted with a plot of land named New Roma. In order to level up, they are encouraged to build structures, maintaining a balance between population and happiness. Tax collectors are seen in togas knocking on the doors of the residences and money starts trickling in. As time passes, the player collects resources with which to build Wonders, the trademark sign of a prosperous empire(-city).

Rome stands in for the Roman Empire in this game. A single city is intended to represent the empire as a whole as if it were all so similar and alike that one city wouldn’t be so different from the next. Inhabitants and structures all look the same and there is no hint of the actual diversity that was present in the empire of Rome. In My Empire, this distillation of empire into a city is furthered by the presence of Wonders of the World. A player can construct Stonehenge, the Pyramids, the Colosseum, and the Pantheon all right next to each other. The furthest reaches of empire are neatly contained in this homogenous valley of Roman culture. 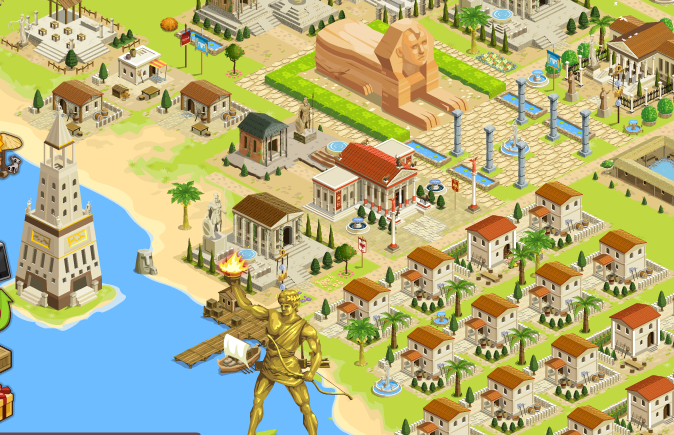 After the player has been introduced to the game’s concept of “Roman”, they are then prompted to travel to a nearby island and clear it of resources and inhabitants. The rugged and savage barbarians have kidnapped a family member and must be destroyed. Only by clearing every small square of land of its barbarians and treasures can one’s family member be recovered and the rule of Rome affirmed. Despite this charming narrative overlay, there is never any follow-up and before this point in the game, there had been no hint of a story. The quest of the kidnapped cousin is really just a ploy to introduce players to the military aspect of the game and the presence of barbarians.

When the player arrives on the distant island, they see land covered in jungle and fog. Clicking on a piece of land will typically bring up a battle sequence between one’s own Roman soldiers and the native inhabitants. The barbarians are shown to a player directly opposite a Roman soldier as you can see in this screenshot. Next to the crested helmet and polished armor of Rome are the rags and primitive implements of the barbarian. Clearly, they are uncultured, inferior, and unworthy of the land’s resources they possess. In contrast to them, Roman looks all the more superior, successful, and progressive. This clear distinction between Self (Romans) and Other (barbarians) serves to both justify the player’s engagement in conquering this island and also instill a sense of entitlement in their minds.

Not only are barbarians presented visually opposite to the Romans, their landmass is separated from that of Rome proper. Their exclusion from the limits of culture and empire is emphasized by the map and travel mechanics in the game. Battles with barbarians take place in an entirely different screen and there is never any contact between barbarians and the mainland. They are ever on the periphery and always outside the limits of empire and culture. We, the Romans, live here where it is safe and beautiful. They, the Other, live out there where it is wild, untamed, and unpredictable.

The Roman empire in this game, the city and its soon-to-be conquered lands, represents an ideal of cultural identity. In this land, it is easy to distinguish a Roman from a barbarian. There are no problems of identity because there is no diversity. Either one wears a toga, lives in a Roman city, and visits the baths or else they wander the uncultured wilderness far off the map. Further, there is no ideology of equality. Rome is just better. Romans have culture, trade, and military strength. The barbarians have resources that they aren’t capable of putting to use so it only makes sense to destroy them and take it. Somehow, in the world of this game, these notions of superiority pose no moral problems, no ethical questions. The goal is simply to destroy and conquer those who don’t look like us. And we do.