While Play the Past gravitates towards games that simulate, teach, or reimagine cultural heritage, we also consider games as cultural heritage; games are social practices and products as rich in historical value as any of the more familiar artifacts and documents we use to uncover the past. I want to highlight one way—one way out of many—of thinking about videogames historically and culturally, a mode of analysis called platform studies.

Platform studies attempts to go beyond what we see on the screen as we play games. It considers the software and underlying hardware of systems, exploring the relationship between these hidden foundations and the more visible creative and expressive acts that appear on the surface of the machine. Platform studies also reaches out beyond the computer or console itself, investigating how people use the platform in ways both expected and unexpected.

Elements of platform studies have been in place in the new media and game studies communities for some time (such as N. Katherine Hayle’s call for media-specific analysis), though the most direct predecessor is Lars Konzack’s 2002 paper, Computer Game Criticism: A Method for Computer Game Analysis. Originally presented at the Computer Games and Digital Cultures conference, Konzack’s work proposed a “bottom-up” seven-layer approach to understanding videogames, beginning with the hardware on which the game is played, and moving to the code of the game, its interface, and so on. In 2006, Nick Montfort adapted Konzack’s model, reducing it to five layers and using it in order to understand the Atari VCS game Combat. Montfort’s five layers next appeared in Racing the Beam (2009), Montfort’s and Ian Bogost’s inaugural book in MIT Press’s Platform Studies series. Racing the Beam more fully examines the Atari 2600, connecting the MOS 6502 processor and the TIA video chip at the heart of the VCS with the code that programmers had to squeeze into 4K of cartridge ROM, and juxtaposing these constraints of the platform with outside forces, such as release deadlines and franchise demands.

The five layers of game analysis outlined by Montfort in 2006 and again toward the end of Racing the Beam are in no way meant to prescribe or limit what constitutes “platform studies.” But I do imagine they will inform other books in the MIT series. In any case, they provide an elegant starting point to begin thinking about digital games beyond merely playing them with a critical eye. 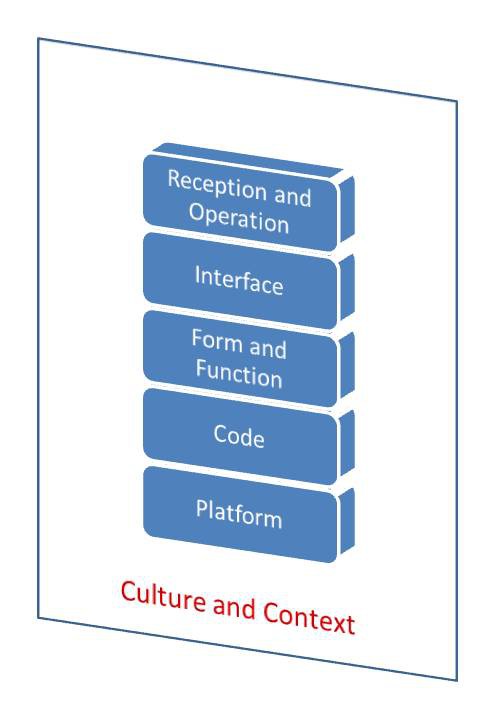 Beginning at the bottom level, there is the actual platform, that is, the physical hardware the game is played on. We tend to think of platforms in terms of brand names—Apple IIe, Sega Genesis, Xbox360, Nintendo Wii, iPad. But in fact a platform is a composite of various chips, circuits, controllers, storage devices, and so on. And each of these individual components offers affordances—capabilities that are both enabling and limiting. The Commodore 64’s MOS Technologies 6581 chip, for example, was a dedicated sound chip that gave the Commodore 64 three-voice music and sound, a startling advancement that made the computer a formidable gaming machine.

The code is the next layer of the model. It’s the software the realizes the game, and it’s often dependent on the platform underneath. Think of how some older Mac software no longer runs on recent MacBook Pros. The problem is due primarily to Apple’s shift from PowerPC microprocessors to Intel processors; the Intel chips have a different architecture, which can break code designed for the PowerPC chips. Examining code—whether functional or not—can lead to a greater understanding of games, a point I’ve tried to demonstrate on Play the Past and elsewhere.

Following the code is the form and functioning of the game. Usually this is what we talk about when we talk about games. It’s the simulated game world and the rules therein. It’s the core mechanics and the sound and graphics. It’s the procedural rhetoric of the game, the playable assumptions of the game. Read almost any scholarly work on videogames, and this is the level under consideration. Rare are the critics who pay attention to the layers below the game form.

The layers above game form have, in contrast to those below, received attention from critics. The interface of the game is the contact point between player and machine—the screen, the controllers, the keyboard, the Wii Balance Board or the Kinect. These are all examples of interfaces, and the relatively venerable discipline of human computer interaction (HCI) is just one of many fields that have brought their methodologies to bear on understanding how interfaces shape our experiences with computers. In the world of games, what’s the difference between using an Xbox controller to play a first-person-shooter or using the classic WASD keyboard combination? What about the move from the phosphorus glow of CRT screens to the pixellated precision of LCD screens? How have games changed to match high definition displays? And the shift from a directional pad on a Nintendo DS to a touch screen on the iPod Touch can be measured in terms of interface as well.

Sociologists, anthropologists, and psychologists have long studied the upper layer, the reception and operation of games. How games are played, how they are received, and how players (and non-players) make sense of them. Sherry Turkle’s classic Life on the Screen explores the way undergraduate students used MUDs and MOOs in the eighties and early nineties to reshape their off- and online identities, for example. Delving into the world of chiptunes or the demoscene would likewise require an attentiveness to reception and operation, and in particular, an appreciation of the way virtuosity, prestige, and social capital work in technologically-oriented subcultures.

Finally, bounding all of these layers is the broader historical and cultural context. And this is where I see platform studies as an especially rich mode of historical inquiry. Look closely at any of the five layers and you can see how it is not only dependent on the layers below, but also on the context that presses in from every side. Racing the Beam is as much a history of pop and videogame culture in the seventies as it is a close examination of the Atari VCS. Similarly, a platform studies book on the Commodore 64 would resonate with the eighties, in terms of the technology inside the device of course, but also in the way the computer was designed, manufactured, marketed, and used.

Every console is a product of its times, quite literally. And every piece of software too is a historical document. This history might be self-evident, were it not for our tendency to think of consoles and computers as black boxes plotted out only on one timeline—a teleological timeline of ever progressive, ever closer-to-perfection machines. But a host of other timelines intrude upon this single timeline. Timelines concerning technology, yes, but also, timelines in which tangential cultural movements and unpredictable economic shifts occur. Timelines in which class and gender comes into play, timelines littered with dead-end advances and surprising new fads. Timelines of corporate takeovers and programmer rebellions. Timelines of stasis riven by punctuated equilibrium.