By: PastPlayer
In: Articles
With: 2 Comments

From Jan 20-22, THATCamp Games took place at the University of Maryland.  Organized by Anastasia Salter and Amanda Visconti, THATCamp Games brought nearly one hundred professors, graduate and undergraduate students, archivists, librarians, game designers, and alt-ac professionals together to explore the  role games play (and might play) in the intersection of teaching, technology, humanities, and the academy. Several Play the Past authors were fortunate enough to attend, and each came away with a variety of thoughts as to the most interesting conversations they had, the most compelling sessions they attended, and the most interesting (and fun) games they played.

My overwhelming impression was of eagerness: the eagerness of those of us who are already using games to do humanities to share our triumphs and to help others learn from our failures, and the eagerness of those who can sense that games have the capacity to move humanities forward but haven’t yet tried it themselves to bring something home from THATCamp with which to ignite their own practices. Kevin and I were extremely gratified by the response to the bootcamp we gave, along with our colleagues Steve Slota, Mark Pearsall, and Emily Lewis, about designing practomimetic courses; I also got to lead a session abut how non-video games may have greater affordances for humanities research than their flashier cousins. And Sunday morning I got to design a little game about philosophy with the wonderful Darius Kazemi.

Among several other wonderful things, I attended Matt’s wargame bootcamp, too, and thoroughly enjoyed Amanda’s literary ARG session, where I got to explore the crazy theory (which I’ll actually talk about in a post tomorrow here on PtP) that novels can be games. I concur wholeheartedly with Matt’s justifiable pride in thinking that the camp was a huge success; games are even more naturally interdisciplinary than the humanities themselves are, and the immediate potential for hands-on work is enormous. It’s enough to make you think there’s no crisis in the humanities–just, as yet, an insufficient amount of playfulness.

I won’t lie to you: before last weekend, I thought I could be all THATCamped out. (“Do we have to open a Google Doc if there are just five of us sitting around a table? Couldn’t we use a piece of paper?”) But Roger is right, the energy and enthusiasm at THATCamp Games was irresistible. Amanda, Anastasia & Co. did an epic job, with lots of terrific little touches like the Going Cardboard screening, the ever-beckoning games collection, and the custom-made THATCamp Games Invasion ARG.

For me, the weekend’s highlights included Matt Kirschenbaum’s wargame session (and the chance to see an infintessimal fraction of his wargame library); Shawn Patrick Doyle‘s bravura one-man show on teaching writing with gaming, or vice versa; Roger Travis & Kevin Ballestrini almost making their practomime / course-as-ARG approach seem feasible for us mere mortals; a standing-room only session on puzzle design from the team behind Arcane Gallery of Gadgetry, the history ARG that as far as I can tell does everything right; and watching Tim Burke bang off a typically penetrating blog post in under six minutes, while talking to me and eating a large sandwich. And even though I didn’t play, how could I not love an academic conference with a pickup game of RuneQuest. RuneQuest! (I’m not sure how I can explain the strange anachronistic awesomeness of that to those of you who don’t know the game, a rival to Dungeons & Dragons from the days of 8-tracks and van art. It’s sort of like if Burt Reynolds showed up at the MLA.)

As for me, I got to meet PtP comrades Matt, Kevin, and Roger, plus many other excellent folks. I spilled the beans on Tecumseh Lies Here to anyone who would listen. (“Dan, I’m not a Republic serial villain. I ran the game last fall.”) And I stood up in front of the whole crowd and pretended to be a text adventure parser.

What has stayed with me most since THATCamp Games is how many people I met there–including, I have to say, many with non-permanent, non-tenure track jobs at institutions where neither money nor time are in copious supply–are pouring their hearts and their summer vacations into amazing ambitious games and game-like activities for their students, museum goers, or library patrons. This inspired me and troubled me at the same time. Because games are fun, but they’re not easy. I had a conversation on Saturday morning with Jason Rhody, as we picked our way across a treacherous frozen parking lot, about why educational games are hard to fund and sustain. Games are gambles–they fail as often as they succeed. They’re often ephemeral. And of course they don’t always sound serious and important to the people who give away serious and important sums of money. So I come home energized and inspired by the people I met at THATCamp Games. I just hope all their effort and enthusiasm will be appreciated and somehow rewarded.

I’ll have to echo the mob’s sentiments here: Anastasia, Amanda, and everyone else involved in the organization of the weekend did an unbelievable job with all of the logistics. The University of Maryland was a fantastic host to all of us who had descended upon the campus, coming from many different parts of the country. Well, everyone involved except for the folks at SuperShuttle, but that is a story for another time.

The leaders of Friday’s bootcamps provided nice opportunities to get involved in some of the various aspects of game-making and course-building. I especially appreciated the techniques that Shawn Doyle shared with us on how he uses various small games to build the writing skills of his students at Cornell College. In addition to the fun (Skynet + utilitarianism!) we had in our own bootcamp (as Roger alluded to above), it was also a pleasure to finally meet Rob and Matt in person during Matt’s great workshop on war-games.

Perhaps, though, the best part of the weekend was the depth of conversations that occurred during the breakout sessions on Saturday. I had the fortunate privilege of leading a discussion on the role of badges in education, both on the institutional and course level. Other sessions that I attended were on using games for teaching argument, the role of learning management systems in course design, and narrative design. I even had the opportunity to play test a couple of student-made games while Roger examined life.

My TCG began with a two-hour set-up for my workshop on wargames and conflict simulation, which was inspired by my PtP post on “War, What is it Good For?” My pitch was that regardless of one’s interest in history (and especially military history), this particular tabletop genre, which still sees several hundred new titles published each year (and no, you don’t need an engineering degree to play them!), brings some unique perspectives to the conversation on game design: in particular, the necessity to storyboard game play against the “ground truth” of a historical record of events, the challenges of asymmetrical game design (good generals didn’t fight fair after all), and a long established player tradition of game modding in the form of house rules and variants. I spent some time talking about the history of wargaming, then invited folks up to the front of the room for a “table talk” where I showed off the games I had set up, and concluded with a quick design exercise modifying the “States of Siege” system introduced by Victory Point Games. 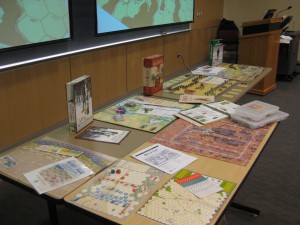 Saturday started out with a cracking session on Games Research Methods proposed by Jason Rhody. The conversation took a pronounced turn toward archival and material culture issues, including access to design records from corporate properties. PtP’s Rob MacDougall had some tremendous insights from the neighboring field of business history, pointing out there is often a window of opportunity between the time when a game is an active commercial property and when it fades into obscurity during which scholars and preservationists need to act. Later in the day I found myself in a session on gaming (or sometimes “gamifying”) the literature classroom. I introduced the IVANHOE Game developed by Jerry McGann and Johanna Drucker over a decade ago, which is playable in a variety of different implementations. Rachel Donahue led a good session on game preservation.

There’s a lot more to say, but I’ll stop here. I’ll confess to being biased because Amanda and Anastasia are both current/former students of mine, but I think THATCamp Games was a smashing success–not only logistically and organizationally (despite the challenges of an overnight ice storm), but also in striking a terrific balance between serious discussion, hands-on skills building, and flat-out gaming fun. I knew I was in the right place the moment I heard the d10s clatter.