The Icon of (Minecraft) Mario

By: Jeremy Antley
In: Articles
With: 0 Comments

In my previous post examining religious elements in Minecraft, I looked at the presence of pilgrimage in the Minecraft Middle Earth project.  Today I want to continue this line of thought and now look at video game recreations utilizing the Minecraft game system and how these recreations take on characteristics similar religious icons found in the Russian Orthodox church.  (I’ve selected the Russian Orthodox Church only because of my familiarity with this tradition- if readers have familiarity with other denomination’s use of icons, please leave comments below.)

For a brief summation of what the iconographic tradition means in Russian Orthodoxy, I turn to James Billington’s classic work on Russian culture, The Icon and the Axe. 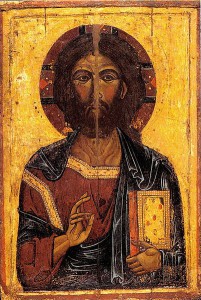 988 is one of those ‘must-know’ dates in Russian history, as that fateful year in the 10th century marked the conversion of Kievian Rus’ (the historical precursor to the later Muscovite state) to Eastern Orthodox belief.  One of the venerable traditions of Eastern Christianity centered on the use of icons to act not only as communicators of a spiritual message but also as conduits through which both believer and believed could communicate.  According to Billington, Russia amplified two tendencies already present in 11th and 12th century Byzantine icons: they dematerialized the figures in icons, presenting the saints in a prescribed and stylized form, while also providing a new richness of detail through added coloring and emphasis on controlled emotional intensity.

The style is instantly recognizable.  Billington summarizes the features succinctly when he states,

“The flat, two-dimensional plane was religiously respected.  Not only was there no perspective in an icon, there was often a conscious effort through so-called inverse perspective to keep the viewer from entering into the composition of a holy picture.” (31)

Now take a look at this re-creation of the original ‘Super Mario Land’ made for the Nintendo Gameboy handheld system.

Now I want to make clear there are obviously major differences between Russian Orthodox Icons and a Minecraft recreation of Super Mario Land, beyond the obvious sacred vs. secular divide.  To begin, icons almost always avoid depicting ‘action’ scenes whereas Minecraft Super Mario Land is clearly an ‘animated’ series.  Icons embrace a two-dimensional perspective, while the video above employs a ‘slanted’ perspective that brings a horizon line to what would normally be a two-dimensional image.  Yet if we deconstruct the Minecraft Mario video and analyze it as a series of ‘still frames’ (it was a ‘stop-motion’ video after all) then it becomes easier to view individual scenes as their own ‘icons’ containing deeply symbolic imagery. 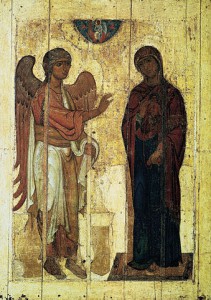 Also, once you consider that Iconography evolved over the centuries to accommodate new construction materials and methods- even to the point of depicting increasing action- the aesthetic differences between Icons and Minecraft Mario begin to fade.  Consider the second half of Billington’s statement above- that icons utilized ‘inverse perspective’ to keep the viewer separate from the icon composition- and then watch the video of ‘Minecraft Mario’ again.  The use of a platform to project a real sense of space between the viewer and the stop-motion images assembled below does indeed create an ‘inverse perspective’.

If we go further and consider the presence of the ‘iconostasis’ (quite literally a screen of icons that found particular development in the realms of Muscovy) then the idea of sequential images conveying a shared narrative bring the cultural impact and makeup of the icon into greater alignment with that of ‘Minecraft Mario’.  Billington states that the iconostasis, ” (represents) a kind of pictorial encyclopedia of Christian belief.”  While Super Mario Land for Gameboy could hardly be considered encyclopedic, it does resinate for many as being a core component of the ‘handheld’ video-game canon.  While it is only a fragmentary portion of that canon, it nonetheless captures, for many, the beginning of a storied tradition in gaming. 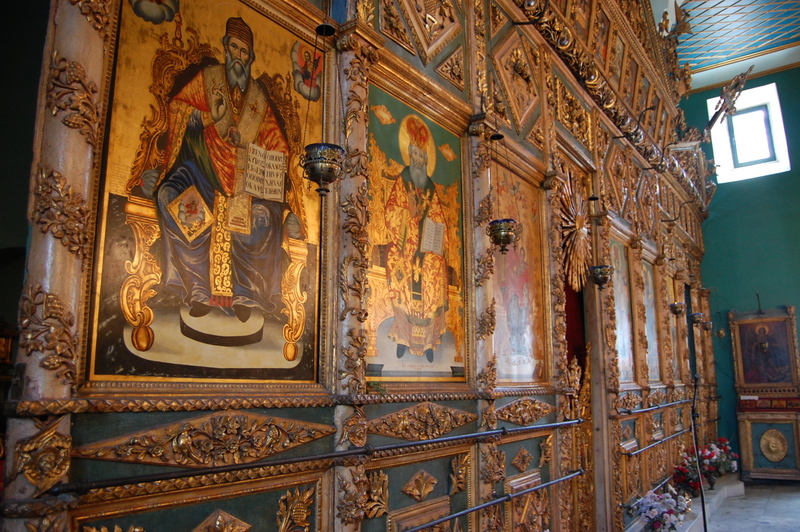 By creating a literal space between the viewer and the recreation of ‘Super Mario Land’, watching the stop motion video becomes a recreation of the nostalgic,  whereby you place yourself in the playing act through both memory and a ritual performative stance made possible through perspective.  In some small sense, the same qualities an icon holds for the believer- acting as a conduit between this world and the next- finds parallel here as the ‘Minecraft Mario’ recreation becomes a conduit between this world and a nostalgic conception of the gaming past.

2012-04-24
Previous Post: Detour to the Magic Kingdom (rules of the text 6)
Next Post: A Response to the Concept of Caricature