Locations carry a great deal of narrative potential for us, even in everyday life. Locations carry meaning in themselves and communicate temporal significance through their changes. Certain places evoke particular memories of times that were different. When one goes back to their hometown after an extended time away, we immediately mark the new shops, new development, abandoned storefronts, etc. The change apparent in a familiar place marks the passage of time more significantly than any clock or calendar. Today, I want to look at how locations tell stories in games and how that compares to the way we tell stories about the past via locations.

One of the most common beginnings to stories is: “Once upon a time…”,  setting us in some temporal location in the past. In writing classes, we learn to “signpost” our writing with terms like “next”, “then”, “after”, etc. When reading novels, we often encounter temporal phrases like “the next morning” or “after the sunrise”.

In games though, such temporal markers are much more rare. Oh, they show up, especially in cutscenes and opening movies, but it is less often and usually outside of normative play. Time is marked partly by how quickly you move through a space, but more importantly, by the different spaces themselves.

We mark space in a game story often by asking “where” we are in the game. It is a question that asks about both space and time simultaneously and that can often be answered by space alone. Say I’m playing Tales of Symphonia (one of my favorite games) and you ask where I am in the story. I could answer, “I’m in the dungeon of water,” and by that location alone, you would immediately know at what temporal point I am in the story. 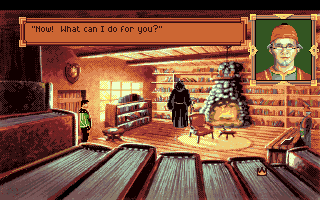 In adventure games, these locative transitions often mark temporal movement by incorporating change. In King’s Quest VI (another of my favorites), I can enter the bookshop for the first time and see a mysterious hooded figure. Only after I have completed some event or task will the scene change when I enter again. In the game code, this is marked by a simple flag – has the character completed X or have they not. There is no temporal allowance there. It is a static place that is simply represented different ways. To the player however, that representation communicates the illusion of temporal movement because of its represented change.[1]

Games then are a) static structures of code that are represented differently in order to give an illusion of temporal movement, and b) a medium that tells narrative often through spatial progression rather than temporal progression.

How does this compare to how we view the past? Much of our understanding of the past comes from archaeology, a discipline centered on particular spaces, and through them, particular times. A couple of years ago, I was at a site just south of Rome. The story of that location was told through the space we discovered. In this village site, it was the different spaces we walked through and uncovered that told the story of the inhabitants. Time was somewhat murky and difficult to mark with precision. The space however was clear. There were dramatic changes apparent from one layer to the next, and from one section to the next. A narrative could be constructed telling the story of that city through the changes visible in the space themselves. Pottery finds could add some temporal anchors, but the pottery itself helped tell the story because of the location it was in. Objects found in a grave had a different meaning than those found in a settlement.

The past itself was apparent through the space we were in. Marked off from the land around it, that location was not just a different part of the Earth, but marked a different point in time as well. What time exactly? It’s unclear. What is clear is that it was before now, that one section of the site came before another, that the change in the space itself marked a change in time. 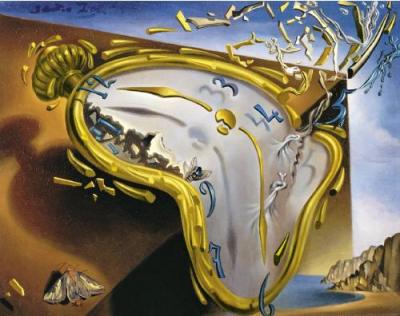 Time is a strict master of our lives. Our clocks tick like marching bands, and our calendars send reminders just on schedule everyday. But time in our mind, in the way we actually understand our lives, is quite different. We know that keeping busy makes time go faster. We know that vacation journeys pass more quickly on the way home than on the way away. We are shocked when we learn we have been in the same town for six years when it feels like only two. We understand time much differently than how we measure it, yet we continually try to anchor ourselves in objective time. Our photos are marked with dates. We schedule reunions at 5-year intervals as if that somehow matters. We are mortal creatures and thus bound to time, but perhaps change as evident in any space is more meaningful than some quantified measure of time.

In folklore studies, Vivian Labrie has shown how oral storytellers recall the tales they tell via the spatial progression within them.[2] It is the movement from location to location that helps them recall the story. Not the logic. Not the time. The space. Storytellers can map out their tales as pictures of spaces (holding characters) in a series connected by arrows. The logic of those connections comes out in the telling, but isn’t necessarily held in the memory. Location is. Even in Homer, we can see how the teller imagines narrative progressing between particular locations. There are temporal markers in the poem as well, of course, but the significance of that time, the change, is visible in the particular spaces themselves at different points in the story.[3]

So why is this important? What does it matter if space tells story? For one, I think it is important to realize that our minds may value space more importantly than they do time. For designing games, this means particular spaces and the progression of those spaces will be able to carry meaning without text and without temporal markers. Change itself, whether change in one location or the change that comes from progressing to one location from another, is enough to tell story. For teaching history, it may mean that understanding events as changes in particular places or as a progression of locations is more useful than understanding events as markers on a timeline. One is a story; the other is just a series of events.