There has been a recent blooming of games that place players in narrative-free survival situations (often called “survival sandboxes”). There’s something about the thrill of living when you should be dying. Often, much about these games are taboo in the classroom- hopeless violence, unacceptable language. But games can be studied without being played, given the amazing number of gameplay videos and wikis for almost any video game. Despite the controversy, I think the thrill of survival can motivate students, and that the worlds created to simulate survival situations are great fodder for critical historical and scientific analysis in classrooms.

Both DayZ and Rust, like Minecraft, spawn players with next to nothing (in the case of Rust, naked) and leave them to fend for themselves or to team up to survive. In both cases initially, the games included zombies. Rust eventually removed the zombies, seeking to remove its label as a DayZ clone (are zombies a way for game designers to allow violence against humans who are dead anyway? Probably an issue for a separate post).

DayZ and Rust are next-gen survival simulations, incredibly open-world, huge difficulty, in which the causes of death would be an insurance adjuster’s nightmare- cold, starvation, cholera- but mostly murder. In each case, death takes your stuff, and makes you start over at a spawn point.

These games could never be played in a classroom, but I think that some sort of data collection, visualization related to game play and/or specific gameplay videos could be valuable. A very recent “anthropological study” of DayZ, for example, analyzed the tendency of survival sandbox games to “get murdery,” and then the chief investigator got a little murdery himself.

What is it like to play a survival game where most of the death is not dealt out by swords, automatic weapons, or C4? How about a historical simulation that simulates death as experienced by most humans in human history- old age, disease, accident, starvation? Is there a game that has no zombies, no crazy multiplayer, and real-like forever- death? 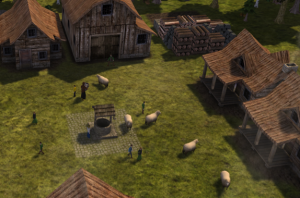 According to the creator, Banished is a “city-building strategy game, you control a group of exiled travelers who decide to restart their lives in a new land. They have only the clothes on their backs and a cart filled with supplies from their homeland.” The technological period of the game is meant to be Medieval Europe, although there are agricultural products that only existed in the Americas at the time (a common error in “medieval” media).

What is most useful, I think, for history education is that actually reaching a “city” population seems to be impossible as the game is written. Life for the inhabitants of Banished towns is brutal and highly subject to the whims of weather and the dearth of knowledge about basic survival in the mind of the 21st century player.

After playing the game for an hour or so, my students couldn’t seem to get the population above 28. What was holding back their little hamlets? The answer is, of course, code.

But isn’t it refreshing to have a “civilization building” game that keeps civilization out of your grasp? Shouldn’t we be tired of the inevitable march of human progress from games like the Civilizations or the wide range of free to play games like Grepolis or Kingdoms of Camelot? My personal record for Banished is 40 in-game years. My town almost collapsed a few times, my population rose and fell erratically, and my cemeteries had 50 or so tenants. Within that time, my citizens made no technological progression, despite the fact that they did improve upon their job efficiencies. Isn’t that the way it usually was historically?

I see Banished as a way to help students understand a key set of historical/prehistorical concepts not easily understood by minds familiar with “history” television, and “historical” video games. Why, for most of human history, did populations remain small? How was it possible for some populations to be completely wiped out? Why is studying war and conflict only a tiny part of the human experience?

Let students play the game long enough to reach a population ceiling. Then, 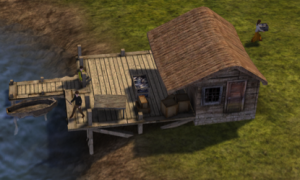 offer them a chance to write an imaginary “mod”- a change in the game that would allow the player to penetrate the population cieling (incidentally, Banished’s developer is planning to release mod tools).

I think what the students would discover, among other things, is the need for a food surplus and more player power in controlling their minions. This would be a great educable moment- the simulation of the need for an agricultural revolution and social stratification in the development of early cities.

Banished could be useful in both World History and early American History classes. As I’ve discovered through the use of activities and content at Penn State’s Medieval Technology and American History, much of the tech of the North American colonies still resembled that of medieval Europe. The game could also aid in questioning the myth of the self-sufficiency of the European/American colonist, as playing “hard mode” makes it incredibly difficult to survive without a trade connection and the manufactured goods it brings.

Here’s a quick list of the possible “mods” (real or proposed) that I think could leverage Banished’s experiences in the classroom:

1. How would Banished change if it were set in a different biome? What would an Indus Valley Banished, or a Mesoamerican Banished look and play like?

2. Let’s say 35 migrants settle in your town (“nomads” may randomly and rarely enter your town in the game). What jobs would you give to/create for them?

3. Create a population pyramid representing your population at the games’ start. Do the same after 5 years of play. How does the age structure of a population affect its chances for growth and/or survival?

5. In the aftermath of the Roman Empire, how would you represent the challenges communities faced in securing food and protection? How could you simulate the rise of feudal contracts?

6. In the North American colonies, how would your Banished town be affected by mercantilist policies enforced by the colonial power? What manufactured goods could increase your town’s economic independence?

7. Play the game for as many years as you are old, and imagine that you were born in game year “0.” How was your (real) life experience regarding family and friends similar to/different from the progression of the game?

8. Based on the experiences of your town’s inhabitants, what might their culture look like? Both material and nonmaterial?

9. After a long and happy life as the leader of your town, you’ve reached the end of your life. You want desperately to insure that your town and all of your friends and family continue to survive. What advice, chronology, or information would you prepare for your successor? What decisions did you make in the life of your town that were investments for the future, beyond your own life? 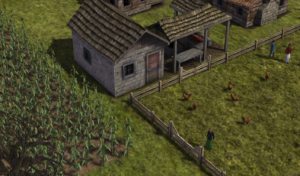 In the case that I seem to be gushing about Banished, let me point out a few criticisms. Firstly, I find as a history educator that I not only am at war with presentism and popular media, I’m also in a struggle to help students understand the innate intelligence and agency in all human beings, ever. Banished does somewhat serve the idea that history is comical, and that people in the past were stupid and impressionable. Banished does not simulate individual agency at all. Children die of starvation a few feet from the food-laden storage house. Citizens obey orders no matter how ridiculous. The shortfall, however, is great ammo for class discussion and/or a mod design.

Then, of course, there’s the anachronistic: no reliance on colliers and charcoal over coal from the ground, no grain milling, no smelting of iron ore, citizens are healed by physicians, foresters replant trees. Or the simply out-of-place: potatoes, corn, and other American crops.

As for now, Banished’s pros are much more numerous than its cons, and almost all of the cons can be modded away. Mod tools for the game are reportedly in development. People are already being historically playful- like recreating the seigneurial system of New France.

Have you played? Love to hear comments, criticisms, or especially other educational uses of survival games..