Oxenfree is not a game you’d immediately associate with history. The adventure game, released on various platforms in the first half of 2016, follows five teenagers as they visit an island for a party but soon become involved with a supernatural presence. Without giving too much away, the group discovers ghosts, time travel, and that the true story of Edwards Island is not at all what it seems. Although the plot itself is largely reminiscent of science fiction movies from the 1980s or more modern tributes like Stranger Things, the island and its background draws heavily on themes of historical memory and preservation.

In the course of the game, players are given the ability to listen to recordings that explain the history of Edwards Island. Originally discovered by the Portuguese, it was granted to Colonel Caleb Edwards for his service in the American-Indian Wars of the nineteenth century. After his death, ownership of Edwards Island returned to the U.S. Government which built Fort Milner in 1941 to serve as a base for harbor defense. On October 28, 1943, a submarine, the USS Kanaloa, sunk off the coast of Edwards Island and 97 lives were lost. The submarine’s propeller was recovered in 1962 and became part of a monument on the island’s Main Street in 1965. The island remained a military base until 1974, when the Radio Communications School that was part of the base relocated to Southern California. In 1979, a sculpture known as “The Sentry” was installed on the island in 1979 to remind visitors of the island’s military history. By visiting all of the radio beacons, players participate in a guided audio tour akin to those currently available at museums and Civil War battlefields. 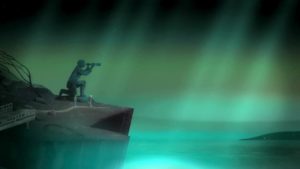 As the player can eventually discover, however, much of the story told by this tour is untrue. Late in the game, players are given the option to uncover hidden letters that explain what really happened to the USS Kanaloa and why the island is largely abandoned. Notably, the hunt for these letters is entirely optional and players can complete the game without learning the real history. For those who choose to ignore the side quest, the radio history remains effectively true as the plot reveals only a few new details.

While perhaps unintentional, this optional side quest echoes a persistent problem in historical memory and preservation. A tourist is often unlikely to learn more about a topic beyond what is presented to them. Visitors to my hometown of Litchfield, Connecticut, for instance, might believe that the town center has remained largely unchanged since the turn of the nineteenth century. In reality, Litchfield was one of the earliest to embrace the colonial revival movement and embarked on an extensive mission to return the town to an imagined past. Similarly, tourists visiting Boston can stand on the marker signifying the site of the Boston Massacre, completely unaware that the marker has been relocated three times since it was created. Public historians must often grapple with the myths and slippages at historic sites that allow for visitors to come away with less than the full story.

Oxenfree also makes an important point about historic preservation. When arriving at Fort Milner, players can encounter a sign announcing how the base will soon be refurbished and preserved as a historical site. Despite the sign’s optimism, players quickly find that Fort Milner has been a ruin for several decades. 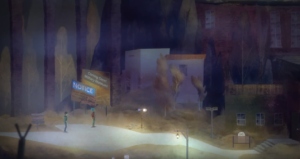 One of the aforementioned letters explains that a resident spent considerable time and money convincing government officials to abandon their plans for a museum. The player sees that once officials withdrew their interest in the site, it was left to the elements. With our own history, preservationists must constantly grapple with the problem of public interest. Even if a building is historically significant, it will be left to decay without funding and support. For every Margaret Mitchell House, there are ten other local sites waiting to be demolished.

While not its primary goal, Oxenfree calls attention to how we see and interact with the past. Historical memory is constantly changing and this process can allow for errors to creep in. Without preservation and interpretation, the myths can replace the history. If we allow that to happen, all that remains is a good ghost story.

2016-11-22
Previous Post: From line-end formula to aristeia: how an epic ruleset goes from mechanic to theme
Next Post: Path of Honors Update