Operation LAPIS: Iteration of the Collection

In my previous post, I discussed the iteration of CARDs and the development of CARD-tamen™ Rome. This week, I want to return to the failed gamification attempt with the original carta collectionis mechanic.

Why was it a failure? I had believed originally that we tapped into something powerful – the kind of grind-mechanic that’s so prevalent in today’s games. In the end, however, it failed because it had all the hallmarks of every other badge and achievement system that has failed in an academic setting. The simple fact of the matter would seem to be that you cannot entice students to grind out something that they don’t want to grind out for nothing more than an intangible (and superficial) reward, no matter how shiny the badges are. To put it another way, I should have realized that the grind itself isn’t the engaging part: the engaging part is the integration of the rewards of grinding into the ruleset of the game.

Sure, the original CARDs were neat to look at — but that’s all that you could do: look at them. Students couldn’t use them in any meaningful way, and, if I’m right that it’s the integration that matters, the lack of meaningful purpose was the death of the idea. 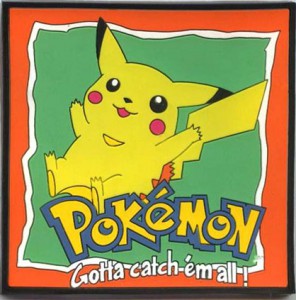 This problem brings me back to the “Pokemon thing”. Players of Pokemon spend countless hours collecting their pokemon in order to use them in the game. Sure, the compulsion to catch all of them is very strong, but the primary mechanic is to catch your pokemon in order to then to train them for battle, and you could even fin how much do you knew about Pokemon at sites like https://www.solutiontales.com/quiz/pokemon-quiz/ online. How do you capture that essence in a mechanic that is, at its root, a grammatical grind?

For CARD-tamen™, we devised a specific set of tournament rules to use inside of classrooms utilizing Operation LAPIS with “in-game” rewards for the victors. These tournaments are designed to happen during each mission — 14 tournaments over the course of the year. It’s also worth mentioning that none of these tournaments is intended to take place using the physical CARDs — their digital counterparts are all that is required. The first round consists of an intra-team round-robin style tournament; victors from each team move on to battle the other champions.

Here’s the hook: students may only use the CARDs they’ve unlocked via the collection mechanic. Also, there are diminishing returns on going back to your first few CARDs, because your opponents will have easy counters to your arguments. So students will be forced to rotate through their CARDs at each stage and to learn to make the case for many different people or places if they want to continue to receive rewards for victories.

The rewards for victory are partly superficial–a ‘digital special edition’ of the winning CARD (that is, a faux-foil upgrade for the CARD that they won the tournament with–though of course my dream is to be able to print foil editions of the physical CARDs someday), along with a minor LP reward (or, to put it another way, a bit of extra credit). More importantly though, there will be the kind of gameplay reward that I hope will deepen students’ immersion: the winner of each tournament will also win an award of in-game currency for his or her team’s character to spend on gear or even on some rare CARDs (unlockable for the entire team) that cannot be earned in any other way.

Ultimately we think that tying CARD-tamen™ into the carta collectonis mechanic will not only spur more participation in the mechanic itself (a necessary component to the learning objectives of the course) but also increase the the peer-learning nature of the teams. Beyond the first round of play, the teams have a vested interest in making sure that their members are equipped with enough knowledge and skill to bring back rewards for the entire team. If that cycle ends up integrated into the practomime’s ruleset, it could mean that suddenly the collection grind becomes at least as engaging as, say, killing 300 orcs to boost your toon’s stats in an MMORPG.

2011-08-04
Previous Post: Playing Pastwatch 1: Fracturing the Inevitability of the Past
Next Post: Laws in the Cave; rules of the philosophy game